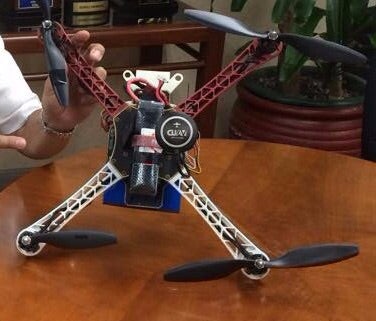 With a no-fly zone covering a 10-kilometer radius over the Ninoy Aquino International Airport (NAIA), a damaged drone was found on Sunday morning on the grounds near the runway.

It turned out that the unmanned aircraft vehicle (UAV) was the creation of a 16-year-old electronics and robotics enthusiast who had just been too eager to fly his “baby” and lost it some three weeks ago.

Airport groundskeeper Homer Asuncion was maintaining the lawn at the edge of the runway near the NAIA terminal 2 when he stumbled, around 10 a.m. Sunday, onto the crashed UAV lying on the grass.

In a report to the Manila International Airport Authority (MIAA), airport ground operations and safety division officer-in-charge Reynaldo Lontoc said that safety officers responded to a report of a foreign object debris or FOD at the rapid exit taxiway near the runway’s edge and recovered a drone.

The safety officers waited for office hours the next day, Monday, to report their find.

The UAV with a damaged propeller was turned over to the NAIA Intelligence and Investigation Division (IID) where the drone’s owner, an incoming teenage avionics student, was accompanied by his mother.

The 16-year-old boy said he flew on April 27 his assembled drone from outside their house in Merville Subdivision in Parañaque City but he accidentally maxed the throttle, causing it to uncontrollably shoot up.

“I did not mean it to fly so far,” the worried boy confided, saying that he just really wanted to test out the drone he assembled himself.

The boy’s mother told the Philippine Daiy Inquirer that she had been warning him on testing out his drone. “I’ve been reminding him constantly but he got too excited after putting in a new part and disobeyed me,” she said.

She explained that for three years, her son had been painstakingly searching for and buying parts to assemble his own UAV.

On April 27, she said, the 16-year-old boy had gone home agitated and told her he lost his drone.

“He has been asking around the subdivision and on the Internet for it since. We were really praying that it did not do anybody any harm,” she told the Inquirer.

While the teenager was happy that he found his drone, he promised to start being a responsible UAV operator. “I am just glad that it did not harm anyone,” he said.

The Civil Aviation Authority of the Philippines (CAAP) regulates UAV ownership where a drone operator has to qualify for a radio operator’s certificate of proficiency, pass both the aviation license theory and instrument theory examinations, complete training to operate the type of UAV he owns, and complete at least 5 hours experience operating a UAV outside controlled airspace.

An applicant for a drone license, according to the CAAP must have a flight crew license with a command instrument training or a military qualification equivalent license or an air traffic control license.

The CAAP has designated airports, crowded areas, as well as specific government buildings as “no fly zones.” At the NAIA, a 10-kilometer radius no-fly zone is in effect, which includes the Merville Subdivision area.

Violators face fines from P300,000 to P500,000 for each unauthorized flight depending on the gravity of the offense.

While the NAIA IID does not intend to charge the teenager for the incident because of his minor age, the CAAP has taken over the investigation of the case.