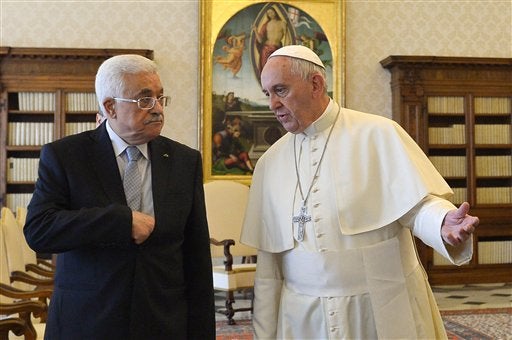 VATICAN CITY — Pope Francis praised Palestinian President Mahmoud Abbas as an “angel of peace” during a meeting Saturday at the Vatican that underscored the Holy See’s warm relations with the Palestinians as it prepares to canonize two 19th century nuns from the region.

Francis made the compliment during the traditional exchange of gifts at the end of an official audience in the Apostolic Palace. He presented Abbas with a medallion and explained that it represented the “angel of peace destroying the bad spirit of war.”

Francis said he thought the gift was appropriate since “you are an angel of peace.” During his 2014 visit to Israel and the West Bank, Francis called both Abbas and Israeli President Shimon Peres men of peace.

Abbas is in Rome for the canonization Sunday of two 19th-century nuns from what was then Ottoman-ruled Palestine. The new saints, Mariam Bawardy and Marie Alphonsine Ghattas, are the first from the region to be canonized since the early days of Christianity.

Church officials are holding up the new saints as a sign of hope and encouragement for Christians in the Middle East at a time when violent persecution from Islamic extremists has driven many Christians from the region of Christ’s birth.

In a statement Saturday, Abbas praised the two new saints as inspirational models for today’s Palestinians and urged Christians like them to remain in the region.

“We call on Palestinian Christians to stay with us and enjoy the rights of full and equal citizenship, and bear with us the difficulties of life until we achieve liberty, sovereignty and human dignity,” he said.

Abbas’ visit comes days after the Vatican finalized a bilateral treaty with the “state of Palestine” that made explicit its recognition of Palestinian statehood.

The Vatican said it had expressed “great satisfaction” over the new treaty during the talks with the Palestinian delegation. It said the pope, and later the Vatican secretary of state, also expressed hopes that direct peace talks with Israel would resume.

“To this end, the wish was reiterated that with the support of the international community, Israelis and Palestinians may take with determination courageous decisions to promote peace,” a Vatican statement said.

It added that interreligious dialogue was needed to combat terrorism. TVJ