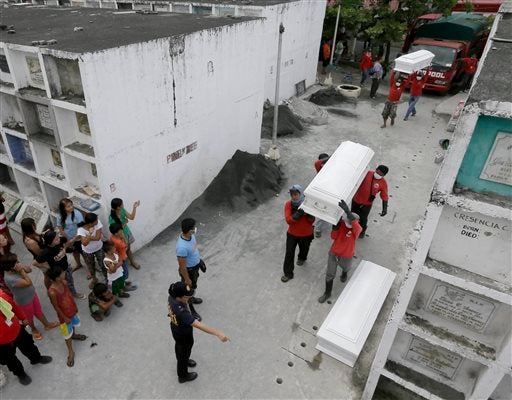 Workers carry coffins of fire victims for mass interment into apartment type-crypts Friday, May 15, 2015 at a public cemetery in Valenzuela city, a northern suburb of Manila, Philippines. AP

The management of the footwear factory in Valenzuela City hit by a deadly fire on Wednesday has promised it would release salaries and other benefits to its employees and their families by Saturday.

Speaking before the victims’ families, Renato Paraiso, lawyer of Kentex Manufacturing Inc., said all employees, whether living or not, would receive their salaries in addition to overtime pay and three to five days’ worth of wages tomorrow.

“Tomorrow we are going to give the salaries of all employees, whether dead, injured, or survivor,” Paraiso said in Filipino. “Whatever benefits are in accordance to the law, we are going to grant them.”

Medical and burial expenses will also be shouldered by the management, Paraiso said.

“We are asking for your patience because we are also having difficulty in looking at the records. We don’t want to act without basis. We want you to receive the salaries and benefits that you deserve,” he added.

The counsel said Kentex was also trying to coordinate with the employment agency of contractual employees.

“What I can promise you is that we are going to reach out to the agency, and if you want, we are going to go after them. We will provide you with lawyers who can help you,” he said.

As of posting, the death toll of the blaze was recorded at 72.