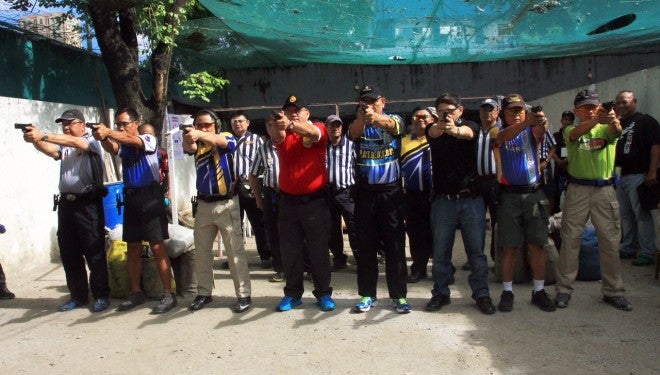 Anti-narcotics officials took a break from their usual work and gathered with their counterparts in a shootfest for the first time “to solidify brotherhood” among the Philippine National Police’s Anti-Illegal Drugs Special Operations Task Force (PNP AIDSOTF), the National Bureau of Investigation (NBI) and the Philippine Drug Enforcement Agency (PDEA).

“The drug problem in our country is manageable but our fight against illegal drugs is very complicated that it needs a united force,” Garbo told reporters.

Newly-minted AIDSOTF officer in charge Senior Superintendent Benjamin Lusad said the activity was initiated to enhance the culture of cooperation between and among anti narcotics unit.

“This is part and parcel of how the PNP levels up its fight against illegal drugs and we try to do it with the totality of our effort involving not only the PNP but the NBI and PDEA as well as the members of our community,” Lusad said.

They may be gathering for recreation but PDEA assistant secretary Abe Lemos said they would still compare notes, lay down strategies of each agency and share insights to improve their future operations.

“This is the first time we joined this invitational shooting but every year we gather with NBI and AIDSOTF and every time we meet we compare and share strategies. Now our main focus is the drug couriers in the country,” Lemos said.

PDEA was among the lead agencies that handled the case of Mary Jane Veloso, the overseas Filipina worker who was duped into smuggling 2.6 kilograms of heroin to Indonesia. It had sent a team to get Veloso’s statement that has become one of the main factors in her last-minute reprieve from her execution.

As for the PNP AIDSOTF’s efforts on eradicating illegal drug activities, Lusad said they have started conducting information drives in villages reminding the public to be cautious and sensitive in dealing with strangers.

For his part, Joel Tuvera, chairman of the NBI Anti-Illegal Drugs Unit, the shoot fest will strengthen further the cooperation and camaraderie among participating agencies, which would soon propose amendments of anti-illegal drugs laws in a congressional committee hearing next week. IDL