Kin of Valenzuela fire victims: Why was there no plan to rescue trapped workers? | Inquirer News
Close
menu
search

Kin of Valenzuela fire victims: Why was there no plan to rescue trapped workers?

Now who’s to blame for the seven-hour inferno in a slippers factory in Valenzuela City that killed at least 72?

While officials are looking into the possible liability of the company and the welders, some families and relatives could not help but wonder why the fire fighters failed to rescue their loved ones on the second floor of Kentex Manufacturing Inc.

Of the casualties, 69 bodies were found in the assembly section on the second floor of the factory on Tatalon Street in Barangay Ugong, Interior Secretary Mar Roxas told families at the Barangay Maysan Hall on Thursday.

Two of the three adjoining buildings in the 3,000 square-meter factory compound were gutted by the fire that started at 11:23 a.m. on Wednesday. Only the storage was not burnt.

Of the casualties, 36 were female while 28 were male, and five remained unidentified, as of Thursday. One of the women was pregnant. Retrieval operations ended at 2:05 p.m.

But Senior Supt. Emmanuel Aranas, Philippine National Police Crime Lab deputy chief for operations, said the death toll could still go up because there were still bodies on the second floor.

“The remaining cadavers were covered by the ceiling that fell down,” Aranas said in a chance interview with reporters Thursday afternoon.

Roxas said, “We cannot tell if the victims were already there when the fire started or if they went up.  We don’t know why there were window bars. But we will get to know that.” 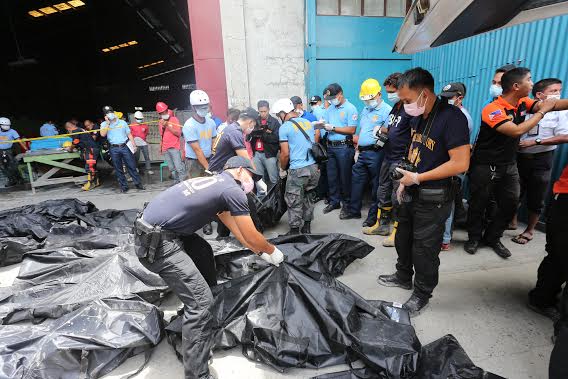 Authorities on Thursday retrieve remains of workers who died in a slipper factory fire in Valenzuela City. PNP-PIO PHOTO

“Nobody could tell, miracles could have happened,” a relative of one of the victims said.

Jessica Reyes, sister-in-law of Eufemia  Reyes, 41, said the fire fighters could have done something to save lives.

“We saw them waving their hands by the window. They were struggling for hours. They could have done something,” Reyes said.

Interior Secretary Mar Roxas said everybody responsible for the conditions at the factory that led to the fire would be held to account.
“Whoever is liable will be held accountable,” Roxas said.

Relieved Valenzuela fire marshal Jose Mel Lagan said they were investigating if the second floor door near the staircase was locked. But that could not be confirmed yet because the door was damaged, he added.

Factory owners could be charged for overcrowding and for not having a welding permit, Lagan said in an interview.

“Number of persons (within a particular space) is supposed to be a requirement because if it exceeds, regardless if the employees are regular or contractual, it’s a violation,” Lagan said.

“Most probably there’s violation because a room with 50 people should have a sprinkler. The gap per head between the sprinklers should be three meters,” he said in an interview.

But Lagan said initial investigation showed that the two buildings that caught fire did not violate any fire code based on its structure.

Valenzuela Mayor Rexlon Gatchalian said one of the burned-down buildings was issued a building permit as far back as 1996.

“Whoever was the building official then was correct in his judgment on the building’s structural integrity, as shown by its four corner beams which remains erect even after the fire,” Gatchalian said.

At 4 p.m., the city government declared a state of mourning. The city council authorized the mayor through a resolution to use all necessary funds for the victims.

Relatives broke down in tears as soon as they saw the rows of dead bodies even when their relatives had not yet been identified.

Marilyn Yco, whose eldest son died, said the remains were no longer recognizable.

“They’re like roasted pig. They were burnt. Some had exposed teeth,” Yco said.

But after seeing the rows of corpse, Yco said she had a strong feeling that his son Frederick, 24, was not one of them.

“I believe he’s not yet dead. He’s just one of those in the hospitals,” Yco said.

Injured survivors were rushed to the Chinese General Hospital and Valenzuela City Emergency Hospital. The city government did not have an exact count of the survivors, as of Thursday.