In hindsight, Jeb Bush says, he wouldn’t have invaded Iraq 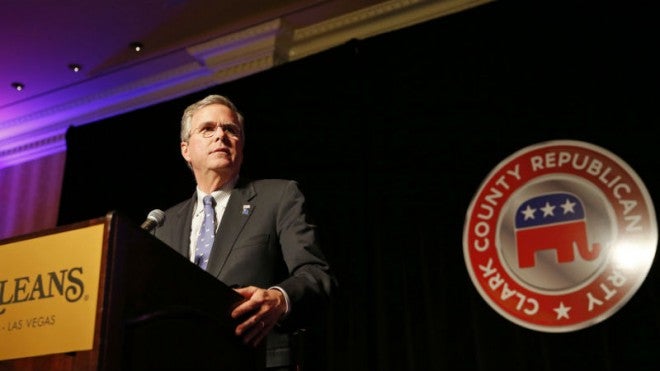 TEMPE, Arizona — After days of refusing to say whether, with the benefit of hindsight, he would have ordered the invasion of Iraq in 2003, Jeb Bush relented Thursday and said he would not have invaded.

“If we’re all supposed to answer hypothetical questions, knowing what we know now, what would you have done?” Bush said with a twinge of annoyance while campaigning in Arizona. “I would have not engaged. I would not have gone into Iraq.”

It was an answer the former Florida governor and likely Republican candidate for president had refused to give in several public appearances this week, even as most of his Republican rivals did so and criticized him for sidestepping the question.

Bush said Thursday his resistance was caused both by loyalty to his older brother, George W. Bush, who ordered the invasion as president, and to the families of those lost in the decade-long war.

“I don’t go out of my way to disagree with my brother,” Bush told a group of reporters when asked about the shift. “I am loyal to him.”

That loyalty could cast a shadow over Bush’s all-but-certain presidential bid, where his family name is both his strongest political asset and liability. He would become the third member of his family to serve as president should he follow his father and brother to the White House.

The Iraq war is among the most defining aspects of George W. Bush’s presidency. More than 4,400 U.S. service personnel died, with many more severely wounded, in a war that cost at least $1.7 trillion and was justified by faulty intelligence that Iraq possessed weapons of mass destruction. None were ever found.

READ: Senator: Bush misled US in run-up to Iraq war
The upcoming presidential contest will likely yield other moments when Bush is asked uncomfortable questions about his brother’s time in office.

Bush said he had not spoken to his brother before talking about Iraq on Thursday, but said the U.S. needs “to re-engage (in Iraq), and do it in a more forceful way.” Bush and other Republicans in the presidential mix often argue that President Barack Obama erred by so completely withdrawing U.S. forces from Iraq in 2011.

Obama has sent a few thousand troops back into the country to help the Iraqi military fight Islamic State militants, and the next president is sure to face ongoing issues of stability there and elsewhere in the Middle East.

“We can’t do this by remote control,” Bush said.

As Bush struggled this week to address the issue, several Republican presidential prospects said definitively they would not have invaded Iraq based on information known today.