Echoing earlier reports, a worker who survived the deadly fire that hit a footwear factory in Valenzuela City said the blaze was allegedly caused by welding work. 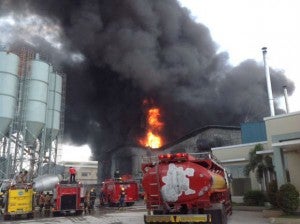 Firetrucks surround the area being razed by a fire at a rubber slippers factory in Valenzuela City. PHOTO BY RADYO INQUIRER 990AM/ERWIN AGUILON

In a report by Radyo Inquirer, Junjun Galas, who worked at Kentex Manufacturing Inc. for three years, said a spark from welding work started the fire that reached rubber materials and highly flammable chemicals.

“Someone was doing welding work then the spark fell and turned into blaze, and the tank just exploded,” Galas said in Filipino. “The fire spread through the slippers we were making.”

The survivor said there was no fire exit on the second floor of the building where most of the casualties were reportedly trapped, adding the windows had grills.

“There’s a door in the second floor but it was always locked,” he said.

Galas also said Kentex factory workers like him received a daily salary of P202 not inclusive of deductions, adding that they didn’t enjoy benefits such as PhilHealth.

As of Thursday afternoon, the death toll from the fire has risen to 72, with the city council of Valenzuela declaring a state of mourning. In a special session, the council also approved a resolution providing financial assistance to the families of the victims and casualties.