What kind of leader will Grace Poe be? | Inquirer News
Close
menu
search

What kind of leader will Grace Poe be? 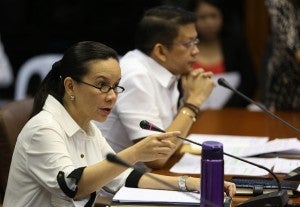 She may be a woman, but Senator Grace Poe assured that she would be a strong leader.

While she has yet to decide whether or not to run for a higher post in 2016, Poe talked about the presidency when asked during a radio interview on Wednesday why should one run for a public post.

The senator said there are people telling her that even if she runs and loses in next year’s presidential elections, she has nothing to lose because would remain in the Senate until 2019. Poe topped the senatorial race when she first ran in 2013.

But Poe said the issue was not about winning or losing the race.

(How will you be able to help—that is really what you are thinking about. What do you want to do? What are your plans for the country?)

(For those who are concerned because I am woman, the least of their worries will have to be the notion that I am weak. I don’t know if people will like me because I am strict. You know that there are compromises to be made in the executive branch. But I also believe in compromise.)

But for those who do not know her yet, Poe said her past actions and decisions would speak for itself.

“Hindi po transactional para sa akin ang isang pagiging pangulo (To me, being president is not transactional),” the senator said.

Poe’s possible presidential run next year came to light again when she met with President Benigno Aquino III before the latter left for the United States and Canada last week.

Latest surveys showed Poe was closing in on Vice President Jejomar Binay in voters’ preference to be the country’s next president. Unlike the senator, Binay has publicly declared his presidential bid. IDL