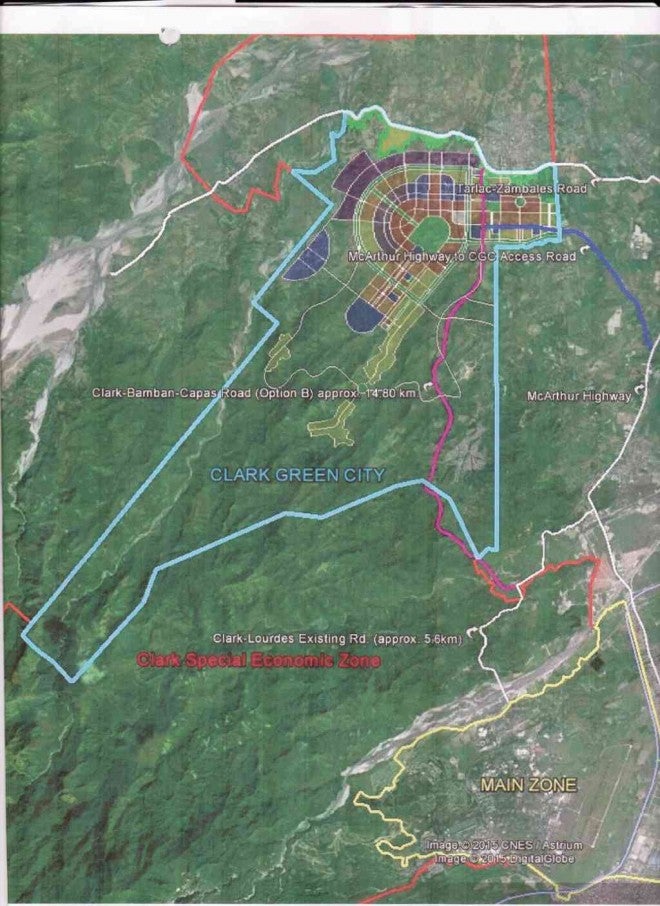 A DPWH map shows the boundary of the Clark Green City in Capas,Tarlac.

The ambitious Clark Green City project of the Bases Conversion and Development Authority (BCDA) has not made public any plans for farming communities it may displace in Capas, Tarlac.

So some farmers have outlined what the BCDA could do for people who were left alone when the American military operated its former base lands in their midst.

“Before this Clark Green City is started, I hope we could be paid for what have grown here. We would also like to have housing hopefully within Capas,” said farmer Angelo Salcedo.

Salcedo, 82, is among the landless of Tarlac’s Gerona town. In 1971, he moved to a small plot in Aquino Page (known among Aetas as Kumaten) in Aranguren village, a community that thrived before the American military built its base there.

Clark Green City is the BCDA’s second city-making project, after the financial district’s Bonifacio Global City that was carved out from Fort McKinley (renamed Fort Bonifacio) in Metro Manila.

Approved by the National Economic and Development Authority in 2013, Clark Green City is primed as the “Philippines’ most modern and the first technologically-integrated city with a mix of residential, commercial, agro-industrial, institutional and information technology developments.”

The BCDA said the new city would become “a green, sustainable and intelligent community for its residents, workers and business establishments.” The agency has yet to state the exact location of the new city’s first 1,321 hectares, the first to be built up out of a proposed 9,450-ha metropolis.

The Capas Green City and Proclamation No. 163 Affected Farmers Association Inc. (or Affected Farmers) has speculated that the city would first rise in Aquino Page behind the Capas National Shrine, a Death March monument.

The farmers reported the arrival of heavy equipment for a road project. Last month, they formed human barricades in Aranguren to stop the entry of the equipment.

A Capas resident, Alfonso Malonso Jr., said President Aquino should remember they still exist in Capas and would need help once the Clark Green City project gets underway.

Aquino had described the proposed Green City sites in Capas as “formerly isolated places,” which would soon be “teeming with opportunity.” He announced in his State of the Nation Address in 2014 that he had approved the Clark Green City project.

“We have … given the go-signal for the construction of Phase 1 of the modern Clark Green City in Capas, Tarlac, that will certainly serve as a center for commerce and industry, not only of Central Luzon, but also of the entire country. At the end of the day, our vision for Clark Green City is that it becomes even bigger than the Bonifacio Global City,” he said.

But upland Capas is “not one large unoccupied territory,” Tarlac Rep. Noel Villanueva said, referring to a map presented by BCDA officials in a hearing at the House of Representatives in June 2014.

In an April 23 letter to lawyer Arnel Paciano Casanova, BCDA president, Reynaldo Catacutan, president of Affected Farmers, said every farmer, who was displaced when the Capas National Shrine was built, was paid P175,000 a hectare by the Department of National Defense in 2001.

The BCDA also paid P150,000 a hectare in 2003 to every farmer affected by the construction of an Army housing village, he said in the letter.

In 2005, the BCDA and Clark International Airport Corp. paid P250,000 to farmers who were told to move out of the Clark Civil Aviation Complex.

Casanova said issues about compensation, damages and resettlement are being discussed in the technical working group (TWG) for the project. “We are in regular contact with the farmers in Capas. We have regular consultative meetings together in the TWG composed of the local government, Congress and the [Tarlac] provincial government,” he said.

Even before the Americans occupied the land, Ferdinand Manaloto was already living in Aranguren. He said he considered the city project the second obstacle to the dream of their clan to own land for good.

“This will be the second time we will lose control of the land. The first time was when this was turned into a US camp,” Manaloto said.

He said his grandfather, Porfirio Nogoy, was among the first settlers there before the US government annexed a large part of Capas to Camp Stotsenburg, the precursor of Clark Air Base, headquarters of the 13th US Air Force.

Manaloto was referring to Executive Order No. 790 that US President Theodore Roosevelt signed on April 30, 1908. A copy of the order showed he annexed to Clark 58,006.5 ha in O’Donnell in Capas.

Nogoy’s early agricultural activities and his undisturbed tenure are best expressed by an access pass dated Nov. 6, 1948, which was issued by the Office of the Provost Marshal of Camp O’Donnell. It said Nogoy was “authorized to work on a piece of land on said village [Aranguren] in the reservation.”

The access passes, which allowed farmers to tend to their fields, were issued due to the intervention of Servillano Aquino, a general in the Philippine Revolution against Spain and great grandfather of President Aquino, according to various accounts of the Nogoy clan.

The subvillage of Aquino Page was given its name because the late Sen. Benigno

“Ninoy” Aquino Jr., the President’s father, gathered them there during the martial rule of strongman Ferdinand Marcos. Page was a US military official who aided Senator Aquino.

These villages are food producers. Palay is planted there twice or thrice a year. Irrigated by streams, these farms yield 80 to 110 cavans a hectare.

Villagers also plant mangoes. A mature mango tree produces an average of 120 “kaing” (bins of fruit). It is estimated that upland Capas produces 10,000 tons of sugarcane a year.

Catacutan, a former Capas mayor, said the area is the town’s “food bowl,” which the BCDA has to address before it decides to displace communities there.