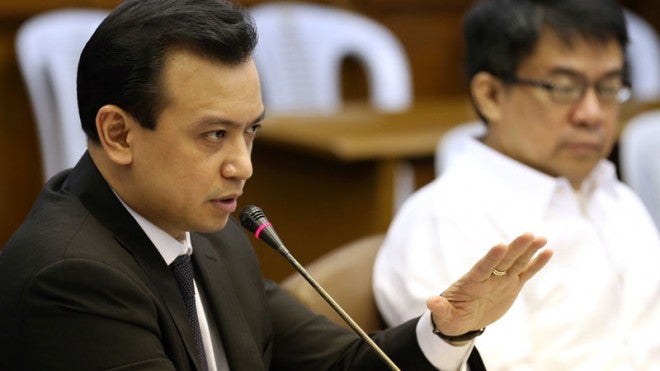 MANILA, Philippines–“Too much of a coincidence.”

This was the reaction of Sen. Antonio Trillanes IV on Monday, pointing out that some people associated with Vice President Jejomar Binay were benefiting either through positions in or obtaining loans from government bodies on his watch.

— Three directors of the insurance brokerage firm that allegedly cornered the insurance of Pag-Ibig Fund (Home Development Mutual Fund) who happened to be partners of the Villaraza Angangco law firm that Trillanes had earlier accused of facilitating the bribery of Court of Appeals justices.

— Tomas Lopez, president of University of Makati (UMak) and head of the Philippine Healthcare Educators Inc., which manages the nursing college in UMak and a member of the Pag-Ibig board of trustees. Lopez also is a director of Agro Fortuna, which used to own the so-called Hacienda Binay in Rosario, Batangas province.

“I wished this was just a coincidence. But citing the pattern of corruption or template of corruption of Binay, I sincerely doubt that,” Trillanes said at the resumption of the Senate blue ribbon subcommittee’s expanded inquiry into allegations of corruption against Binay.

Trillanes said that after 20 hearings, he had seen this Binay’s “template of corruption” as former mayor of Makati City.

He said this template involved the use of “corporate layering” and use of dummies to make money, he later told reporters, in summing up the outcome of Monday’s hearings.

To reporters later, he said this was “too much a coincidence.”

The hearing on Monday took up alleged anomalies at Pag-Ibig Fund as well as the joint venture agreement between UMak and Systems Technology Inc. (STI) to run a nursing college of the public university.

Pag-Ibig is chaired by Binay who heads the Housing and Urban Development Coordinating Council. As for the joint venture agreement, Binay, who was then the mayor of Makati City, forged an agreement between UMak and STI to run the nursing college, which was alleged on Monday to be overpriced.

The first half of the hearing centered on lawyer Renato Bondal’s presentation of his evidence of the alleged overpriced UMak Nursing College as well as the questionable joint venture agreement by UMak and STI through a joint venture corporation—the PHEI—to run the nursing college.

Bondal said the 12th-floor building of UMak Nursing College was overpriced by P579 million considering that it costs P44,531 per square meter when compared to a similar building in Makati City, the Shang Grand Tower, which costs P26,277 per square meter.

He said it took only seven days to award the contract to Hilmarc Inc., which he said was the “most favored contractor of the city government.”

“This is just in one week, how were they able to evaluate the bids when the contract estimate is P1.5 to P1.7 billion?” Bondal asked.

Talking about the joint venture, Bondal said that a Makati City ordinance and resolution were issued in 2003 authorizing Binay to allow UMak to enter a joint venture with STI to create a building for a nursing college and to run it.

He said there was no bidding involved here.

Likewise, he questioned whether the city council gave UMak the authority to make this deal and create a joint-venture corporation through PHEI when the public university was just a “department under the Makati City government.”

Bondal said he was drafting a complaint so he could file charges against the people responsible for this questionable joint venture.

He also asked whether the city government authorized ophthalmologist Dr. Jack Arroyo be granted a 20-percent share of the joint venture between UMak and STI, which had 40-percent shares each.

He said Arroyo, whom he had earlier accused of being a dummy of Binay in the joint venture, should show if the stock and cash dividends were part of his income and whether he paid taxes for them.

Arroyo was a no-show at Monday’s hearing after he was subpoenaed by the subcommittee to attend it.

The subcommittee chair, Sen. Aquilino “Koko” Pimentel III, said he would issue a show cause order on Arroyo why the body should not sanction him for his nonappearance on Monday.

In a letter to Pimentel on Monday, Arroyo, a nephew of former Sen. Joker Arroyo, questioned the May 9 subpoena issued by the subcommittee as this “conjures, to a layman, something sinister, even suggesting the commission of a crime.” He denied he was a Binay dummy.

At the hearing, Federico Cuervo, president and chief executive of Cuervo Valuers and Advisory Inc., said the so-called P579-million overprice would be lower because when he and Bondal talked he was not aware the 12th floor was just a roof deck and not a complete floor. He also did not know that four floors of the 12-floor building were parking spaces.

Lopez defended the joint venture with STI, saying he thought this would enhance partnerships with private firms to help nursing students get job placements after they graduate.

Trillanes and Pag-Ibig Fund president and chief executive officer Darlene Berberabe had heated exchanges when the senator asked her about loans given to allies of Binay.

Trillanes showed four real estate firms that got development loans from Pag-Ibig and that incorporators were known allies of Binay.

Trillanes said Oreta had close links with Binay because it was his firm that bought the Vice President’s property in Tagaytay City.

Trillanes also questioned the fact that Lockton Philippines Insurance and Reinsurance Brokers Inc. was able to get the contract to provide life insurance coverage to housing loan borrowers.

Berberabe said the selection of Lockton was done in a deliberative process by the Pag-Ibig board and that it got guidance from the Good Governance Commission, the Department of Finance and the Insurance Commission.

But Trillanes pointed out that there were three directors of Lockton who are partners of Villaraza Angangco law firm whom he had accused of facilitating the bribe for Court of Appeals justices who stopped Junjun Binay’s suspension from office.

These three directors were Raoul Angangco, who is also a stockholder; as well as Maria Concepcion Simundac and Leo Bernard Samaco.

Binay’s spokesman, Joey Salgado, shrugged off Trillanes’ claims. He said Berberabe and Lopez had been able to explain the issues substantially.