MANILA, Philippines–A total of P670 million in pork barrel funds meant to uplift Muslim Filipinos went to dubious nongovernment organizations (NGOs) recommended by Senators Juan Ponce Enrile and Gregorio Honasan II and 47 administration allies in Congress from 2011 to 2013, according to the Commission on Audit (COA).

The COA said the funds came from the lawmakers’ Priority Development Assistance Fund (PDAF) and Malacañang’s Disbursement Acceleration Program (DAP)—pork barrel programs that the Supreme Court declared unconstitutional and have since been discontinued.

The funds were released through the National Commission on Muslim Filipinos (NCMF), an agency formed under the Office of the President in February 2010 to look after the well-being and culture preservation of Muslim Filipinos.

The COA said the NCMF allowed the PDAF and DAP funds transferred to questionable NGOs and livelihood kit suppliers that were outside the pork barrel scam web of accused plunderer Janet Lim-Napoles.

The Inquirer tried but failed to get immediate comments from Honasan and Enrile.

Enrile is under hospital arrest in connection with the P10-billion PDAF scam allegedly engineered by Napoles. Also detained in the alleged diversion of PDAF funds to Napoles NGOs are Senators Jinggoy Estrada and Bong Revilla. Former Deputy Speaker Lorenzo Tañada III, one of the 47 representatives who used the NCMF as conduit, said that the PDAF projects he downloaded through the NCMF were implemented and not “ghost projects.”

“You can check with the NCMF with regard to their implementation,” Tañada said.

The COA cited the improper selection process in the disbursement of the PDAF and DAP meant for Muslims, pointing out that the senators and representatives themselves handpicked the NGOs or people’s organizations that would handle the livelihood projects for indigent beneficiaries based on their letters to the NCMF management.

“It is the audit team’s view that the selection of NGOs/POs should be undertaken by the NCMF because the funds were released to NCMF, thus, it is duty bound to account the said funds to the government and/or to the beneficiaries,” the COA said.

In its reply to the COA, the NCMF admitted that it had allowed the legislators to choose the NGOs. The NCMF said that this was the “practice” in other government agencies receiving PDAF for soft projects.

But the agency maintained that it imposed a 15-point accreditation process in place for NGOs and only those that met these standards were allowed to receive the funds.

“It is incorrect to say that the NCMF allowed the legislators to impose their chosen NGOs without the checking the eligibility of these NGOs,” the agency said.

But the COA stood by its findings, noting that most of the NGOs/POs granted PDAF and DAP projects were among those endorsed by the legislators from whom the funds of the project were charged.

These were NGOs not owned by Napoles.

The COA also said the NCMF failed to provide complete documents in the grant and liquidation of the P670 million in PDAF and DAP funds it received from lawmakers. 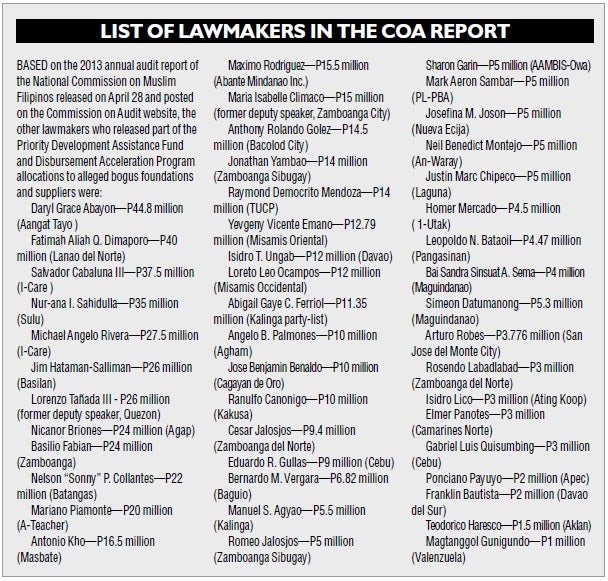 The NCMF failed to monitor and assess whether the NGOs were authentic and implemented their projects, such as soap making, fish processing, candle making, haircutting and cosmetology, despite charging a 3-percent retention fee for every PDAF or DAP fund it processed, it said.

The COA said that out of the 21 NGOs that were chosen by lawmakers, 15 were either unknown or could not be located at their given addresses during the inspection conducted in January 2014.

The office addresses of six other NGOs were found, but the COA observed no existing operations in the sites.

It cited one NGO, Sinag ng Kaunlaran at Pagasa Foundation, which was granted P3 million in the PDAF of Rep. Luigi Quisumbing even though it was “barely eight months in existence without any certified proof that it had implemented similar projects when it received the fund transfer.”

At least three of the NGOs—U.F. Multi-Purpose Cooperative, Commoners Foundation Inc. and Tausog Women Producer Cooperative whose business addresses were located at Samal Village, Maluso, Basilan province; Kajzzelle Bldg., Roxas Avenue, Extension, Kalibo, Aklan province; and North Laud, Siasi, Sulu province—were not visited by the audit team due to the distance and for the safety of the team.

“Since the ocular inspection was conducted, one to two years after the implementation of the project, the nonexistence of the addresses provided by most of the recipient NGOs/POs and the offices maintained by some of them which were no longer located was an indication that upon completion of the PDAF projects, they possibly ceased/stopped operation and/or probably involved in illegitimate business ventures,” the COA said.

The NCMF was urged to conduct an investigation to verify the existence of ultimate beneficiaries and projects actually funded from the funds released to the NGOs and file appropriate charges against those responsible.

The NCMF also noted that the inspection of the NGOs was done almost two years after they were accredited and the projects implemented. “It was possible that some of these NGOs have moved or closed office,” it said.

The same pattern of misdeeds was observed in the suppliers who provided the equipment and supplies for the livelihood projects.

The COA said ocular inspections of the business addresses of the suppliers showed various deficiencies, such as wrong addresses in the official receipts; they were engaged in a different business based on their BIR registration; and some of them were owned by the lawmakers’ project coordinators.

“With all the deficiencies noted, it is the audit team’s view that the livelihood projects implemented by the NGOs/POs were questionable,” the COA said.

The NCMF, however, stressed that the transactions between the NGOs and suppliers were private deals. “There is no law or regulation allowing the NCMF to interfere with such transactions at the time they are contracted as long as these expenses are properly liquidated and the items received by the end-users,” the NCMF said in its reply.

The COA said that as of 2013, only 67 percent, or P451 million, of the P670 million PDAF and DAP fund transfers made by NCMF had been liquidated.