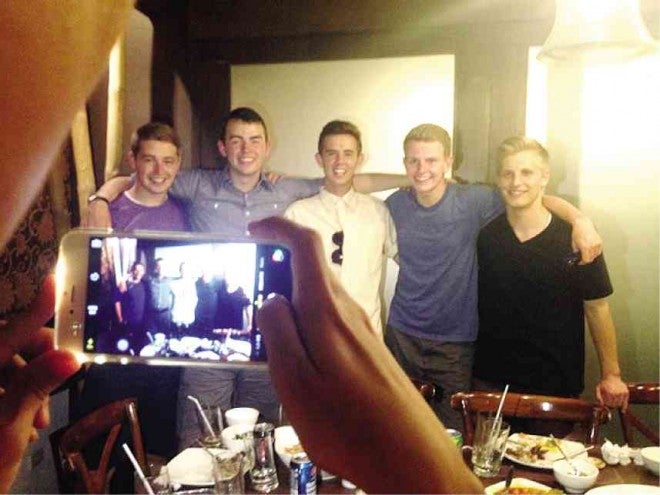 MEMBERS of the Hey Joe Show are (from left) Tylan, Davis, Sumner, Jake and Connor. The group had a mall show at Ayala Center Cebu on May 1. CARMEL LOIS MATUS/INQUIRER VISAYAS

She never took her eyes off the stage as Conor, Tylan, Davis, Sumner and Jake sang and danced their way to the hearts of more than 1,000 people watching their show in Cebu City on May 1.

Lita Tubog, 68, stood out among the crowd of mostly teenagers at Ayala Center Cebu to see the performance of the five Cebuano-speaking Americans.

Tubog has been a fan of Hey Joe Show since her son, Jay, who works in Singapore, had told her about the group’s viral videos on YouTube.

“I kept watching their videos,” she said. “I like the idea that there are Americans who can speak Cebuano very well.”

Likewise, the members of the Hey Joe Show were pleasantly surprised by the warm reception and their big fan base during their two-week stay in the Philippines. They requested, however, that they be identified only by their first names.

The mall shows were meant to test how the Filipinos received them. And they were not disappointed.

The five used to be missionaries assigned to the provinces of Bohol, Negros Oriental and Cebu for two years and fell in love with the Filipinos’ culture and way of life. They were also fascinated with Cebuano, the language spoken in the three Visayan provinces—so they decided to learn how to speak it.

When they returned to the United States, they formed a group and shot a video that would provide “clean and wholesome entertainment” in Cebuano. Doing the video also gave them the opportunity to speak the language and get feedbacks from friends in the Visayas on how they could improve.

They called themselves Hey Joe Show because children used to say “Hey Joe” whenever they walked on the streets in the Visayas.

During their one-hour gig in Cebu, Ayala Center’s activity center was packed with people crammed even at the railings on the second and third floors.

Teenage girls screamed and cheered as the five young men danced, sang and even did a little modeling on stage before capping the show with Sumner’s Cebuano version of Ed Sheeran’s “Thinking Out Loud.”

After the show, the five stayed to have their photos taken with their fans, including some who came from other provinces.

Tubog, who is staying with her daughter in Mandaue City in Cebu, was accompanied by her granddaughter Edsel Trumata, 19, of Dauin town in Negros Oriental province. It was Trumata’s second time to watch the Hey Joe Show since the group performed on April 25 in Dumaguete City, 16 kilometers south of Dauin.

“I’m their avid fan. Since they would be in Cebu, I had to see them again,” Trumata said. “I admire how they are able to capture our culture in their videos.”

The Americans returned to the Philippines on April 24 and performed in malls in Tagbilaran, Dumaguete, Cebu, Cagayan de Oro and Davao. They are scheduled to go home to the United States on May 8 to pursue college studies.

Despite schoolwork, the five vowed to continue doing videos. This time, they wanted to promote the Visayas’ hidden tourism spots.

“A lot of people, even Filipinos, do not realize they have a lot of waterfalls, beaches and mountains to explore. Their culture is also amazing. We wanted them to see that,” Trumata said.