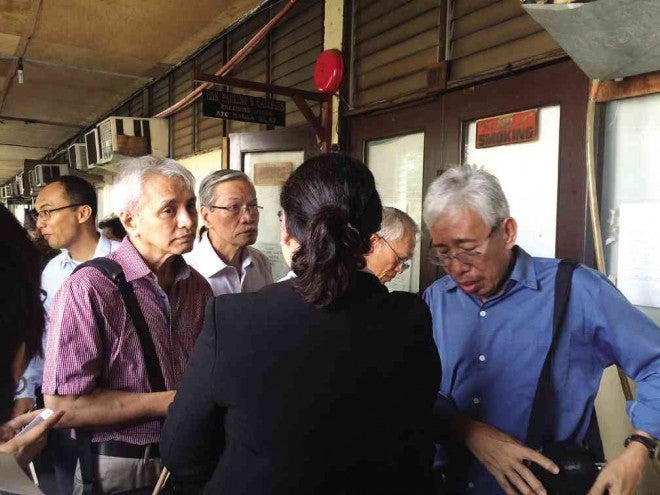 CADRES IN COURT National Democratic Front leaders (from left) Vicente Ladlad, Satur Ocampo, Rafael Baylosis and Randall Echanis confer with their lawyer Rachel Pastores (center, back to the camera) after their arraignment Thursday at the Manila Regional Trial Court, where they face a 2006 charge for 15 counts of murder. Nathaniel Melican

In a packed, sweltering Manila courtroom, top officials of the National Democratic Front of the Philippines (NDFP) were arraigned Thursday for a nine-year-old multiple murder case that started with the discovery of a mass grave that allegedly yielded the remains of suspected government spies “purged” by the communist rebel movement in the 1980s.

Satur Ocampo, Randall Echanis, Rafael Baylosis, Vicente Ladlad and spouses Benito and Wilma Tiamzon did not enter a plea when charges for 15 counts of murder were finally read to them after repeated postponements at Manila Regional Trial Court-Branch 32.

Judge Thelma Bunyi Medina entered a plea of not guilty on behalf of the six accused, whose supporters crammed the courtroom where the sole air-conditioning unit conked out just before the proceedings started.

Their lawyer, Rachel Pastores, made a last-ditch effort to have the arraignment postponed again, citing their pending petition in the Court of Appeals to stop the trial on the ground that the complaint was defective when filed by the government in 2006 during the Arroyo administration.

But Medina, who earlier agreed to reset the proceedings twice this year in view of the CA petition, denied Pastores’ latest appeal, saying the court had set aside “more than enough time” to wait for the result of the petition. The judge set the pretrial hearing for July 30.

Speaking to reporters later, Pastores said “what we have been saying is that these are trumped-up charges against our clients. So we will study what we can do and if we have other remedies that we can avail ourselves of in the pretrial. But we are preparing our defense in case the trial continues.”

The murder charges stemmed from the respondents’ alleged orders in 1985 to purge the Communist Party of the Philippines (CPP) of members suspected of being government spies, under what the military and the police then called “Operation Venereal Disease.”

The charges are also anchored on the discovery of a mass grave in Sitio Sapang Daco, Barangay Kaulisihan, Inopacan, Leyte province in 2006, where authorities said the skeletons of 15 people killed in the CPP purge were found.

Pastores said the charges could affect her clients in their functions as consultants in the stalled peace process between the government and CPP-NDFP. “How can the consultants work for peace when they are busy defending themselves from these trumped-up charges?” she said.

Ocampo, Baylosis, Echanis and Ladlad were arrested in 2007 and 2008 based on warrants stemming from the case, but the Supreme Court, in separate rulings, allowed them to post bail. Ocampo was granted provisional liberty by the high court after arguing against the validity of the charges, while Echanis, Baylosis and Ladlad were released in recognition of their role as the NDF consultants in the peace process.

Currently detained in Camp Crame, the Tiamzon couple were arrested last year for this case and other criminal cases—including murder and illegal possession of firearms and explosives—pending in other courts.