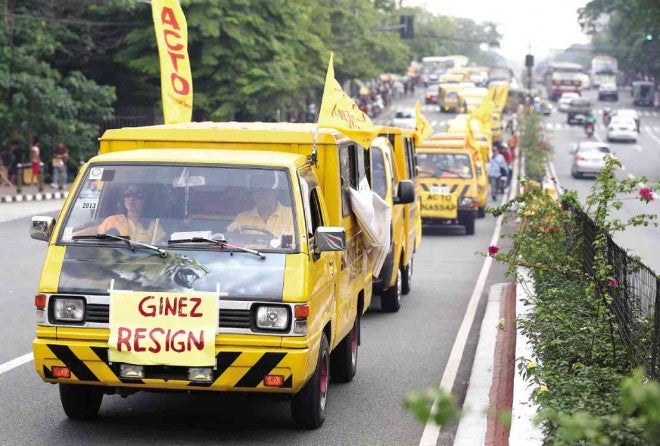 MORE TIME Transport operators roll out a protest caravan Thursday in Quezon City to seek a delay in the enforcement of the age limit on vehicles used as school shuttles. LYN RILLON

The Land Transportation Franchising and Regulatory Board is firm on enforcing an age limit on vehicles used for school shuttle services, despite the mass action staged Thursday by operators demanding a one-year deferment of the restriction.

In a phone interview last night, LTFRB chair Winston Ginez said “the board feels it has given the operators sufficient consideration and reasonable time” to comply with the measure, which was introduced in 2004, deferred in 2007, and revived in a 2013 order that set its strict implementation starting Jan. 1 this year.

Earlier in the day, members of the Alliance of Concerned Transport Organizations (Acto) and the National Alliance of School Service Operators (Nassap) rolled out a 200-vehicle convoy leading to the LTFRB office in Quezon City, demanding the suspension of the measure that bars them from using vehicles that are more than 15 years old.

Issued in 2013, LTFRB Memo Circular 2013-006 states that the age limit shall be strictly implemented starting this year. The rule applies even to aging vehicles whose franchises are still valid.

The board then maintained that it was imposing the age limit, instead of just requiring a certificate of roadworthiness, because the safety of school children “cannot be compromised.”

In an earlier press conference, Nassap president Celso de la Paz said his group was not against the campaign to modernize public utility vehicles. “We will comply, but we are just looking for a way to be able make down-payments for new units.”

In an interview Thursday, Acto president Efren de Luna pointed out that operators were just asking the LTFRB to defer the implementation of the age limit for one year.

He noted that Acto members were already processing loans under the Development Bank of the Philippine’s Cleaner Public Transport Financing Program. Of the estimated 30,000 school bus operators nationwide, only around one percent have been able to procure new vehicles, he said.

De Luna warned that imposing the restriction this year would result in “an instant shortage” of school buses this school year opening. Affected students, he said, would be “helplessly forced to ride unsafe, unregulated or colorum vehicles because we, legitimate franchise holders for school buses, are being phased out.”

He maintained that since school transport services operate only at certain times of the day, “they can still be roadworthy even if (the vehicles) are old.”

Read Next
Caloocan to build P300-M sports complex
EDITORS' PICK
Look Through: Super Typhoon Karding barrels through parts of Philippines
Motorcycles, smartphones, and cash prizes up for grabs in TNT’s ‘Tuloy Ang Saya’ Raffle in Mindanao
Do all the things you do, faster
POGOs not linked to Illegal online gaming, says Pagcor
House energy committee chair Arroyo bats for cheap electricity
Metro Manila now at moderate risk for COVID-19 — DOH
MOST READ
Robredo supporter tackles elephant in room: No massive fraud in 2022 polls, surveys were just right
Comelec invalidates win of sitting governor in Negros Oriental
DepEd: We are in a crisis situation in education sector
Lives destroyed as armyworms invade Philippine ‘onion capital’
Don't miss out on the latest news and information.