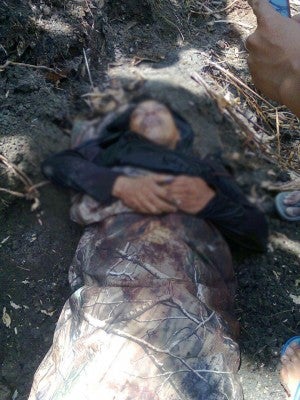 “The plan was to arrest and bring him to our main camp,” he said.

But Iqbal said Usman and his men fought back when being taken in by elements of the 118th Base Command on Sunday in Guindulungan, Maguindanao, last Sunday (May 3). He was subsequently killed, he said.

“But while they are walking, Usman sensed what the real plan was and he tried to fight his way out of that situation. A firefight started where Usman was killed,” Jaafar said.

Jaafar revealed that the remaining men of Usman scampered for safety, taking with them the body of Usman and of the other fatalities.

“We were not able to get Usman’s body because his men took it with them. From what we have heard, he was immediately buried following Muslim tradition. Unfortunately, we do not know where he was buried,” Jaafar said.

The military earlier claimed that Usman was killed by one of his bodyguards who were recruited as an asset by a government operative sanctioned by a joint intelligence body directly tasked by President Benigno Aquino III to track down and neutralize Usman.

This asset reportedly recruited two other men from Usman’s circle to participate in a special operation to take down one of the top terror suspects in the country.

At around 10 a.m. on Sunday, the first shots were fired and the assets exchanged gunfire with Usman and around four loyal followers in Sitio Talanaken, Barangay (village) Muti in Guindulungan town, the military said.

Usman died in the firefight after sustaining gunshot wounds along with four others including the intelligence asset who led the special operations.

A military source said that after hearing the burst of gunfire, members of the MILF’s 118th Base Command responded and swooped down on the site of the firefight.

Jaafar said the initiative of the 118th Base Command to bring Usman to the Central Committee implemented the plan of the Ad Hoc Joint Action Group (AHJAG), which was formed as a mechanism so that both parties could work in tandem to pursue and apprehend criminal elements in the area.

“What is clear and what is important is that we are certain that Usman is dead. If the military claims that they killed Usman, then we actually do not have any problems about it,” Jaafar said.

“Everyone did their part to deny Usman and his man the opportunity to move and strike,” Petinglay said. SFM/AC