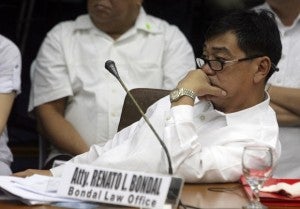 Vice President Jejomar Binay allegedly used the nephew of former Senator Joker Arroyo to make money from the University of Makati’s (UMak) College of Nursing, a lawyer said during a Senate hearing on Tuesday.

Testifying at the resumption of the hearing of the Senate blue ribbon subcommittee, lawyer Renato Bondal said Arroyo’s nephew, Dr. Jack Arroyo, was used as dummy by Binay in a joint venture between UMak and the Systems Technology Institute (STI) to set up a private firm called the Philippine Healthcare Educators Inc (PHEI).

Bondal said Binay and Jack Arroyo were among the shareholders of the company, which was set up to manage the College of Nursing of the university.

Bondal said it was surprising that Jack Arroyo would get the 20 percent shares from the company when he was neither part of UMak nor the STI.

Bondal said the only “logical”  explanation was  that  Jack Arroyo was a nominee or dummy of the Vice President.

He later disclosed that Jack Arroyo was the nephew of former Senator Arroyo, who was in the Senate when the Vice President’s son, Makati Mayor Jejomar Erwin “Junjun” Binay, was detained by the chamber for repeated failure to attend the hearings of the subcommittee.

But based on the documents furnished to reporters by the Office of Senator Nancy Binay about the establishment of the said College of Nursing, the 20 percent shares were supposed to be owned by the STI but were instead taken up by Jack Arroyo.

The documents said that Jack Arroyo at that that time was the president of the American Eye Clinic.

“So that the UMak nursing graduates will have chance to do their RLE (related learning experience) and OJT (on-the-job training) stints in a modern, cutting edge health care institution,” the document said. IDL