CARACAS—Venezuelan President Hugo Chavez told supporters Saturday he was so confident in his recovery from cancer that he will certainly be re-elected next year, and continue to be re-elected through 2030. 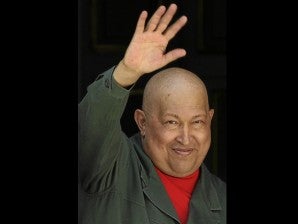 Venezuelan President Hugo Chavez waves at the Miraflores presidential palace in Caracas on October 1, 2011. Chavez said Saturday he is recovering from a cancer that was diagnosed more than three months ago. He was also confident that he will be re-elected in next year's elections and in the following , thus allowing him to remain in power until 2030. AFP PHOTO/LEO RAMIREZ

Chavez had a cancerous tumor removed from his pelvic area in June and has since gone through four rounds of chemotherapy. He and his aides have shrouded the nature of the cancer in secrecy, raising uncertainties about the true state of the 57-year-old leader’s health.

“In the coming year, I’m certain that you will re-elect me president for six more years,” Chavez told supporters gathered at the Miraflores presidential palace.

A constitutional amendment approved in 2009 allows Venezuelan presidents to be indefinitely re-elected.

The ubiquitous Chavez has had to decrease his public activities, and will face a unified opposition candidate in the October 2012 elections.

Nevertheless Chavez, who has been in office since 1999, maintains an approval rating of around 50 percent, according to various polls.

On Thursday, Chavez was forced to deny a report in the Miami-based Spanish language El Nuevo Herald that he was rushed to a military hospital for emergency care following kidney failure.

The Venezuelan president showed up at the presidential palace wearing a baseball cap and glove, tossing a ball as he commented about his health and denounced what he called a “morbid, crass and inhumane campaign” against him.