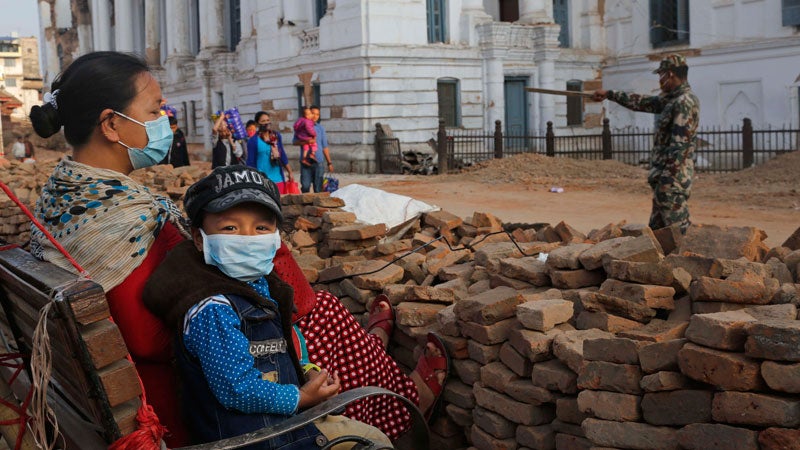 A Nepalese mother with her son looks at the earthquake damaged Durbar Square in Kathmandu, Nepal, Friday, May 1, 2015. The strong magnitude earthquake shook Nepal on Saturday devastating the region and leaving some thousands shell-shocked and displaced. (AP Photo/Manish Swarup)

KATHMANDU, Nepal – Residents of Basantapur, one of the worst earthquake -hit areas in Kathmandu, surrounded Prime Minister Sushil Koirala on Wednesday and vented their ire over lackadaisical response of his government to rescue and rehabilitate the victims.

Koirala was in the area to meet the people of Basantapur and to inspect the sites affected by the quake. He was accompanied by Chief of Army Staff Gaurav SJB Rana.

Some people were furious at the prime minister for showing up five days after the earthquake and did not hesitate to express themselves.

They even tried to obstruct Koirala from visiting some of the quake-ravaged sites inside Basantapur Durbar Square.

Scores of people died and many families were displaced in Saturday’s earthquake in Basantapur area.

The victims have demanded the Koirala government to provide them compensation and relief materials at the earliest.

They have also urged the government to restore the ancient monuments and temples inside Basantapur complex that were damaged by the earthquake.

Koirala also visited the Tribhuvan University Teaching Hospital in Maharajgunj and the Nepal Army Hospital in Chhauni where hundreds of earthquake victims are undergoing treatment.

The patients and their relatives complained to the prime minister that they were living under dire conditions, without adequate drinking water and other essentials.

In response, Koirala assured that he would see to their needs. He also instructed the doctors and health workers to provide the best possible care to the injured receiving treatment in the hospitals.

READ: Aid reaches quake-hit Nepal villagers as death toll passes 5,000
Hundreds of people eager to leave Kathmandu Valley in the wake of the earthquake but could not due to insufficient public vehicles also staged demonstrations on Wednesday.

They demanded the resignation of home minister Bam Dev Gautam, accusing him of not making any transport arrangements for those who wish to leave the valley, fearing possible disease outbreak and shortage of essentials in the coming days.

A disgruntled crowd also ransacked a ticket counter at Gongabu Bus Park after they could not get bus tickets. KS