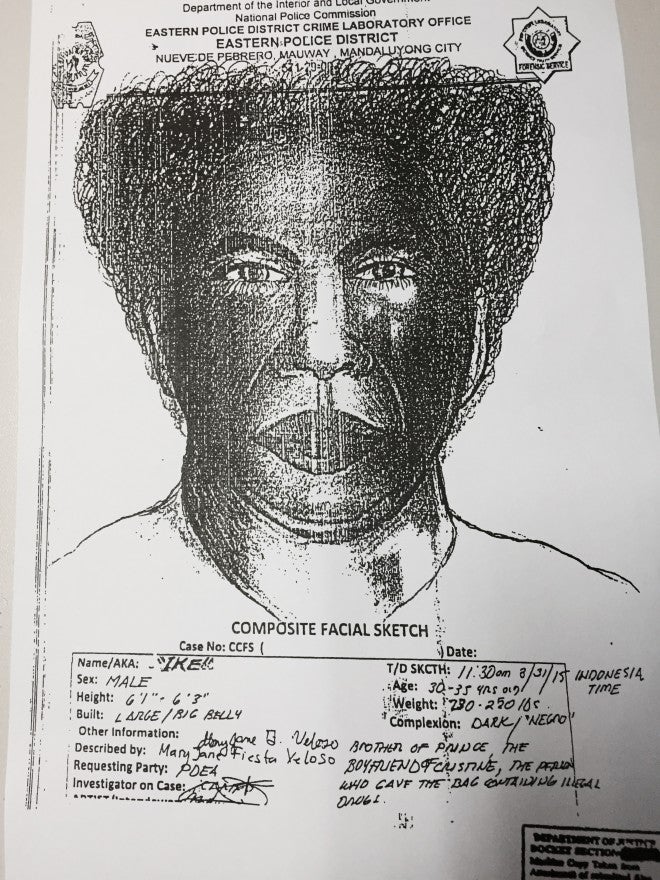 Cartographic Sketch of “Ike,” the man who met Mary Jane Veloso in Malaysia

Mary Jane Veloso, the Filipino sentenced to death in Indonesia, is a victim of manipulation and deception, according to the National Bureau of Investigation (NBI), and has recommended the prosecution of her recruiters for trafficking and illegal recruitment.

The NBI based the complaint on the affidavit of Veloso.

In her affidavit, Veloso said that in April 2010, Sergio recruited her and promised her a job in Malaysia.

Upon reaching Malaysia, they checked in at Sun Inn (hotel) Lagoon and was introduced to a certain “Ike.”

A few days later, Veloso said she was informed by Sergio that she would have to go to Indonesia to meet someone. She said she had no recourse but to follow Sergio because she was looking for a job and had no income in Malaysia.

Sergio bought her clothes because she only had clothes for two days and a luggage.

Veloso said she noticed that the luggage, though empty, was already heavy to which Sergio explained that it was because the luggage was brand new.

She was arrested in Indonesia upon her arrival there for drug trafficking.

“Victim Mary Jane does not know that there were illegal drugs in the luggage she was carrying and that she was a victim of deception and manipulation by her illegal recruiters,” the NBI said in its letter dated April 21, 2015, to the DOJ.

“Facts surrounding the circumstances of her recruitment, transportation and stay at a foreign country also shows that she is a victim of human trafficking owing to the fact that her vulnerability (in dire need of a job in order to support her family) was exploited by her recruiters through manipulation and deception, in order for her to unwittingly transport a contraband without her knowledge,” the NBI said.

Also, a verification made by the NBI at the Philippine Overseas Employment Administration (POEA) revealed that Sergio and Lacanilao have no license or authority to recruit persons for overseas employment.