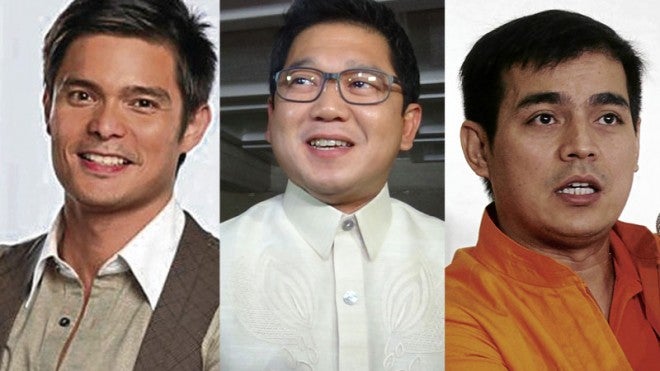 They are among the 19 names short-listed for the administration coalition’s senatorial slate for the 2016 elections, according to Caloocan Rep. Edgar Erice, a member of the ruling Liberal Party (LP).

Only 12 seats in the 24-member Senate are at stake in May next year.

Actor Dantes is the husband of actress Marian Rivera and a commissioner-at-large of the National Youth Commission. Bautista is mayor of Quezon City while Isko Moreno is Manila Vice Mayor Francisco Domagoso. De Lima is the justice secretary and Robredo is Camarines Sur representative and widow of the former Interior Secretary Jesse Robredo.

The LP list includes reelectionists and former senators and members of the House of Representatives.

Erice said the lineup of the LP coalition would be finalized after the announcement of its candidates for president and vice president in June and after negotiations with coalition partners—the Nationalist People’s Coalition, Nacionalista Party, Laban ng Demokratikong Pilipino, National Unity Party and Akbayan Citizens Action Party.

Erice said that at present, the LP was considering only Interior Secretary Mar Roxas as its presidential candidate.

Sen. Grace Poe was being considered for Roxas’ running mate although no formal talks had been made with the daughter of the late actor-director Fernando Poe Jr., he said.

In an interview on dzIQ, Erice confirmed reports that Energy Secretary Petilla had already submitted his resignation to President Aquino.

The LP lawmaker said Aquino had accepted Petilla’s resignation but no replacement had yet been found.

Erice said he expected Roxas and De Lima to announce their resignations in June. Candidates for senator must file their certificates of candidacy in October.

Lacson is on the list because he has not yet decided on making a run for president in 2016, according to Erice.

The LP included Cayetano, a brother of Senators Alan Peter and Pia Cayetano, and Villar, a son of Sen. Cynthia Villar and former Senate President Manny Villar, because it had to reserve seats for its coalition partners.

Erice said that although Isko Moreno belonged to the Pwersa ng Masang Pilipino party of Manila Mayor Joseph Estrada, the former movie actor had sent word to LP officials that he wanted to join the administration’s senatorial ticket.

Only true believers will be in Liberal Party slate, says Roxas

Read Next
Comelec: No time for Bulacan recall poll
EDITORS' PICK
This new condo in the South will make you want to turn a new leaf
Legarda: Ending Violence Against Women, a cause for all
Sara Duterte calls for supporters’ unity after Go’s withdrawal from presidential race
CHR hopes inequalities exposed by COVID-19 pandemic are addressed
BOQ monitoring 64 travelers from ‘red-list’ countries amid Omicron
Smart offers wireless fiber-like speeds to Filipino homes with country’s first 5G Prepaid Home WiFi
MOST READ
DOH: Booster doses for fully vaxxed adults to start December 3
Another disqualification petition filed against Bongbong Marcos
Ex-DOT chief Ace Durano convicted of graft over 2009 project
Roque defends Bongbong Marcos: ‘He was only 15 years old in 1972’
Don't miss out on the latest news and information.