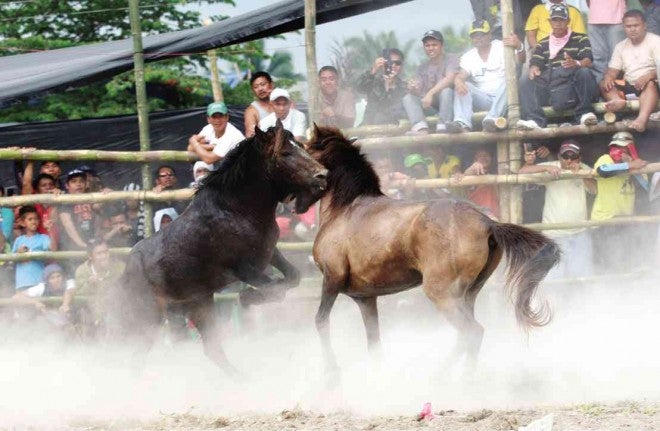 KIDAPAWAN CITY—Leaders of the Manobo tribe are asking the government to reconsider a ban on horse fighting, which they said is part of their culture and tradition.

Raden Iguas, a former indigenous peoples’ representative in the city council, said horse fighting is not just about entertainment during fiestas or cultural celebrations.

“It’s also a determinant of the power of an IP leader,” he said.

Horse fights are among the highlights of these celebrations and the practice dates back to ancient times, said Iguas on behalf of Manobo communities here.

But Amalia Jayag-Datucan, chief of the Department of Agriculture (DA) in Central Mindanao, said under the Animal Welfare Act of 1998, horse fighting was prohibited because it is regarded as animal abuse.

Datucan said the DA would be strict in enforcing the law and violators could face prison terms of up to two years or fines ranging from P30,000 to P100,000.

“Penalty depends on the degree of the animal maltreatment,” she said.

Datucan said the DA is urging concerned citizens to report or file a complaint against those violating the law.

“Public officials and government employees are also discouraged from involvement in horse fighting or any form of maltreatment of animals in order not to face sanctions,” she said.

“Penalties are higher if public officials and employees are involved,” Datucan said.

Dr. John Pascual, head of DA Central Mindanao regulatory division, said the government was only trying to protect animals against abuses, including on horses that are used for horse fights.

“Most of the horses involved in horse fighting usually go home with plenty of wounds that sometimes lead to their untimely death,” Pascual said.

But Iguas said he has not known of any instance of horses dying from fights.

“In so far as horse fighting is concerned, not a single horse had been killed after the fight,” he said. Williamor Magbanua, Inquirer Mindanao