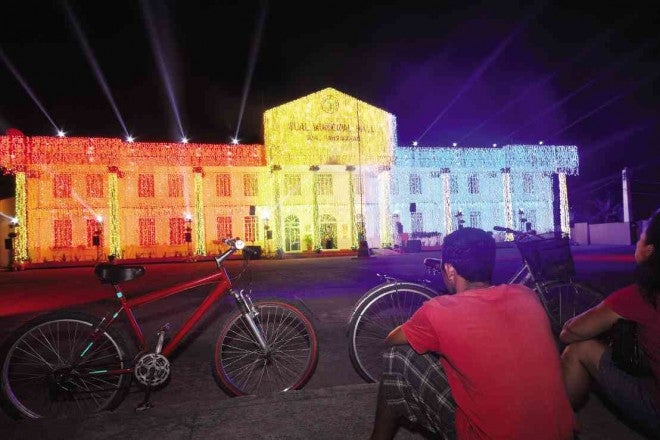 THE TOWN hall of Sual in Pangasinan province is all aglow during a dry run of the “dancing lights” show, a highlight of the town fiesta that starts today.WILLIE LOMIBAO/INQUIRER NORTHERN LUZON

SUAL, Pangasinan—For a second, the town hall here turns into blocks of cool blue and green. Then the pattern shifts to stripes of red and yellow. In a snap, shapes of doors in different hues of the rainbow appear. Next, the entire façade of the building turns blue, green or pink.

As colors change, pulsating fiesta music fills the air around the municipal building of this western Pangasinan town, which hosts the 1,218-megawatt coal-fired power plant owned and operated by Team Energy.

Gift to the people

When this town celebrates its fiesta starting today until next week, residents will be treated to this unique spectacle of dancing lights.

“This is our gift to the people of Sual. We want to make them happy,” said Mayor Roberto Arcinue.

The light display, which Arcinue called “Silew na Bilay” (Lights of Life), costs P1 million and was funded by private donors and sponsors.

About 150,000 LED (light emitting diodes) bulbs occupy every inch of the town hall’s façade and produce hundreds of different hues. The one-week nightly show will start at 7 p.m. and end at midnight.

“The lights represent the people of Sual because they are the ones giving light to the town. They are the ones who give light, inspiration and hope to each of us,” Arcinue said.

He said the celebration was apt because Sual hosts one of the country’s biggest producers of electricity.

The Sual power plant began supplying electricity to the Luzon grid in October 1999 through an agreement with the National Power Corp.

For a festive mood, the local government opted to decorate electric posts along the town’s highway instead of hanging buntings across the roads. Huge balls in green, yellow and red are hung from the posts.

“Most of our residents are seeing this for the first time. This is like the lights display in Makati [City] last Christmas,” Arcinue said. “I’m sure people from other towns will come to see this.”