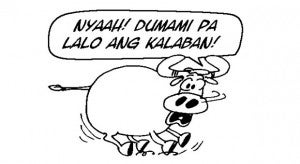 Former Mayor Edward Hagedorn, whose supporters had initiated a recall petition against incumbent Mayor Lucilo Bayron, suddenly found himself facing off against 43 other candidates for the post as the period for the filing of candidacy expired on Wednesday afternoon.

The Commission on Elections (Comelec) itself said it was surprised by the horde of people asking to file their certificates of candidacy (COCs) for mayor, and said its law department would start reviewing the COCs on Friday to weed out nuisance candidates.

“We are going to make sure nobody makes a mockery of this electoral process,” City Election Officer Orlando Ba-alan told the Inquirer on Thursday.

Hagedorn’s camp accused Bayron as being behind what it described as an attempt to discredit and disrupt the forthcoming recall polls, and claimed that the 43 independent candidates were being manipulated by supporters of the incumbent mayor.

Bayron’s camp has refused to comment on the accusations.

Election officials observed that most of the 43 mayoral candidates were ordinary residents, and that most of their COCs were notarized by Bayron’s legal counsel in the ongoing recall process.

One candidate, Fred Abrea, a 60-year-old jobless resident of Barangay (village) Luzviminda, admitted in a local radio interview that while he was a supporter of Bayron, he also wanted “to run against Hagedorn.”

The Comelec set the manual recall elections for May 8.