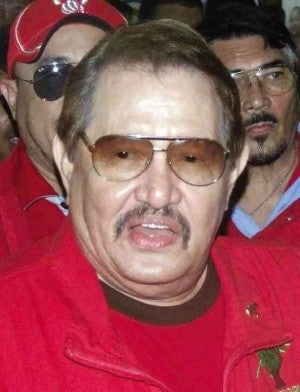 PUERTO PRINCESA CITY—Former city Mayor Edward Hagedorn has filed his certificate of candidacy in the local Commission on Elections (Comelec) on Tuesday morning, officially challenging incumbent Mayor Lucilo Bayron for the mayoral post in the special elections set by the poll body for May 8.

Hagedorn was flanked by his wife and over a thousand political supporters who gathered in front of the city coliseum where the Comelec has been holding office. He vowed to unseat Bayron, a former ally who is serving his first term of office, “to bring back Puerto Princesa into the fast track of progress.”

Hagedorn’s own supporters had initiated a recall petition through a provision in the election code allowing citizens to demand a special election against any current official by gathering the required number of petition signatures from among locally registered voters.

They blamed the current administration for issues such as the alleged rise in criminality and decline in the city’s tourism sector.

All roadblocks to holding the recall elections in Puerto Princesa have been cleared by recent rulings of the Comelec en banc on a series of petitions filed by Bayron’s lawyers, which questioned the validity of the exercise, Comelec city officer Orlando Baalan said.

“We will comply with the election law, whatever accusations are thrown at us,” Baalan said. He brushed aside charges of Bayron and supporters that the poll body had shown bias for the recall petitioners.

The poll official had been at the receiving end of Bayron’s wrath when the mayor barged into a Comelec venue last month while it was verifying the signatures in the recall petition. Bayron tore apart an official Comelec document amid cheers and heckles of his supporters.

Baalan said he had scheduled a meeting with the Philippine National Police to consider the likelihood of beefing up police personnel, considering the prevailing tension between the two camps as the date of election nears.

“We will address those security concerns depending on the recommendation of the PNP,” he said.