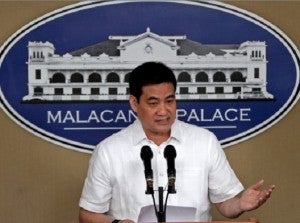 After being called a “cute little US submissive,” the Philippine government on Wednesday said it does not know why China was being “insecure.”

“We don’t understand where this insecurity of the Chinese towards us is coming from. Where do we have the wherewithal to compete against China as a superpower?” Presidential Spokesperson Edwin Lacierda said.

He was reacting to an editorial of a Chinese tabloid with close ties to the ruling Communist Party of China.

The Global Times editorial, which was released a day after the war games of the Philippines with its allies – the United States and Australia, said the “Philippines is the one with the most tricks up its sleeves, but none of its tricks work.”

“Can anyone believe that China can be bluffed to make compromises when others show off their military muscle?” it said.

Unlike other countries involved in territorial disputes with China, the Philippines has insisted on a diplomatic and rules-based approach.

However, it also keeps close ties with the US.

The Global Times article said it imagines “Philippine personnel stumbling after US forces.”

Lacierda said the Balikatan or war games with US has long been ongoing, even before heightened tension in the region over China’s aggressive reclamation work in disputed areas in South China Sea.

He said there is a “noted emphasis on disaster response,” adding that the US has been helping the Philippines during typhoons.

“So, we recognize where they are coming from. We recognize that China wants to make their own comments, that’s their opinion. But we are not bound by their opinion, and we certainly do not agree with how they described us,” he said.

Lacierda said the Philippine government has been conducting war games “for the good of the country.

“Our national interest should prevail over whatever comments that have been stated by that tabloid,” he said.

Read Next
France summons Indonesian envoy over citizen on death row
EDITORS' PICK
Malls adjust ‘NCR Plus’ operating hours for April 12-30 MECQ
Metro Manila to have shortened curfew hours from 8 p.m. to 5 a.m. under MECQ
Pre-order the new vivo Y20s [G] to get a free TWS earphone
Pru Life UK receives four golden arrows for solid corporate governance
‘NCR Plus’ to be under MECQ starting April 12 until April 30 — Palace
Speed up your game with the new vivo Y20s [G]
MOST READ
Stop ‘creeping occupation’ of ‘militia’ boats in WPS, Pacquiao asks China
Bea Alonzo clarifies status of her relationship with Dominic Roque
Convicted former aide of Sen. Bong Revilla dies — BuCor
Locsin to China: ‘Then move out’
Don't miss out on the latest news and information.