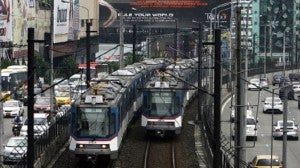 The Metro Rail Transit (MRT-3) has hit the lowest number of operational trains on Tuesday due to a technical glitch that forced several trains to be sent to its depot for repairs.

MRT director for operations Renato San Jose said the MRT-3 recorded the fewest number of operational trains since it first started its operation in 1999.

On Tuesday noon, thousands of MRT commuters were stranded after six trains were not allowed to operate due to lack of Freon or refrigerants.

MRT-3 general manager Roman Buenafe, in an interview on Wednesday over Radyo Inquirer 990AM, confirmed that only four trains were operational on Tuesday noon.

Buenafe said some of the trains’ air-conditioning units were “overworked” due to the high pressure and intense heat.

According to him, the air-conditioning system of some of the MRT-3 trains needed repairs due to the intense heat but the maintenance provider APT Global did not have the enough supply of refrigerants.

Buenafe, however, said that Freons are not that difficult to find.

APT Global has said they only have month-to-month renewable contract with the MRT management so they could not a stock the necessary spare parts in bulk.

But Buenafe said the maintenance provider should have “have invested in spare parts and all the capital spare parts that the MRT would require during the first month of the month to month extension.”

He pointed possible concern of APT Global that since they are on a month-to-month extension, they could be replaced anytime so they could not purchase spare parts in bulk.

“Hindi naman ganoon kadaling magpalit ng maintainance provider for train dahil iilan lang naman kumpanyang nasa ganitong industriya (It’s not that easy to change a maintenance provider for the train because there are only few companies in this kind of industry),” the MRT official said.

As of Wednesday, he said 14 trains are operational to service hundreds of thousands of passengers that ride the train daily.

In recent months, the MRT has drawn sharp criticisms from its riders due to the several technical glitches and long queues at its train stations.