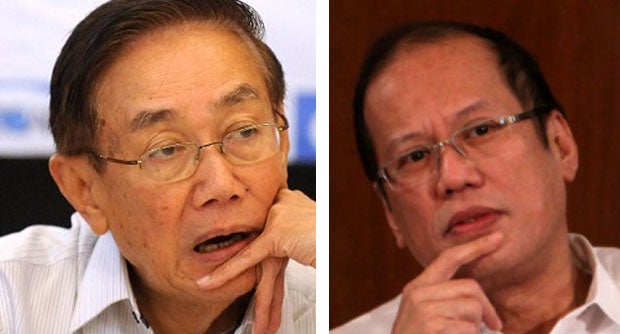 National Democratic Front (NDF) chief negotiator Luis Jalandoni on Saturday said President Benigno Aquino III had become an “obstacle” to the resumption of peace talks with the communist rebels, accusing him of using the Bangsamoro Basic Law and Moro Islamic Liberation Front issues as an excuse to stall negotiations.

Catapang said the AFP fully supported the government in its commitment to end all internal armed conflicts and push peace and development in conflict-affected areas.

Catapang said the CPP-NPA-NDF must only show its sincerity by putting a stop to abductions, killings, extortion activities, improvised explosive device attacks and other criminal activities.

One at a time

Jalandoni told reporters the Aquino administration could only handle “one peace talk at a time.”

“A leader should not just concentrate on one problem. He must have the capacity to face different issues,” he said in a press conference.

Formal peace talks between the government and the NDF stalled in April 2013.

Jalandoni said the NDF was “open to peace negotiations with any administration that is serious in engaging in peace talks.”

If this is not possible during Aquino’s term, maybe it could be done with the next administration, he said.

In October last year, a government delegation met with the NDF in the Netherlands on the possibility of resuming formal talks. In December 2014, a draft agreement was made.

Jalandoni said both sides have made efforts to forge a peace agreement but the government had become preoccupied with the BBL issue after the bloody Mamasapano clash.

Presidential Adviser on the Peace Process Teresita Deles also undermined the previous agreements with the NDF, he said.

The government and the NDF had more than 10 peace pacts signed during the administration of President Fidel V. Ramos.

Initial bilateral agreements included The Hague Joint Declaration in 1992, the Joint Agreement on Safety and Immunity Guarantees in 1995 and The Comprehensive Agreement on Respect for Human Rights and International Humanitarian Law in 1998.

The Hague agreement states that the NDF is not under the government’s judicial entity, thus, the 15 NDF consultants and the 500 political prisoners should be released.

Jalandoni said peace advocates had been urging the government to “respect all agreements, address the roots of armed conflict and resume peace talks.”

But the government wants “surrender” talks, he said.

He said the the leftist group remains strong in 71 provinces, contrary to the President’s believe that the CPP-NPA-NDF is losing strength.

What went before: Peace talks between government and communist rebels