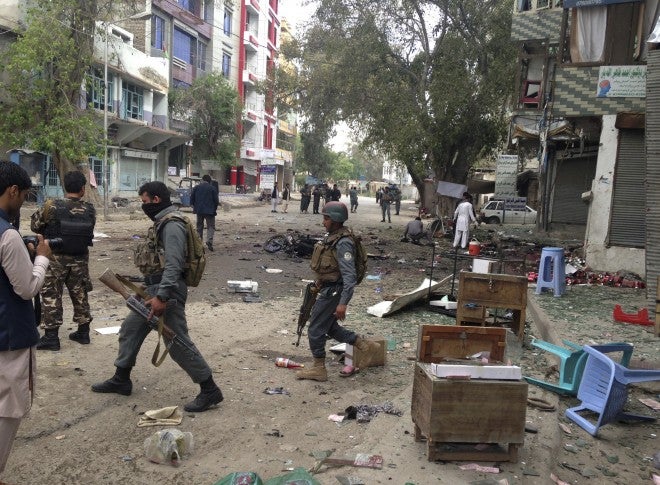 Afghan security forces members inspect the site of a suicide attack near a new Kabul Bank in Jalalabad, east of Kabul, Afghanistan, Saturday, April, 18, 2015. A security official says that at least 22 people have been killed after a suicide bomber attacked a bank branch in eastern Afghanistan. AP

KABUL, Afghanistan— A suicide bomb attack on a bank branch in the eastern Afghan city of Jalalabad has killed at least 30 people, officials said.

Ahmad Zia Abdulzai, spokesman for the provincial governor in Nangarhar province, said on Saturday that more than 80 people were also wounded in the attack in Jalalabad, the provincial capital.

“There are reports of many wounded people in critical condition at the hospital,” Abdulzai said.

The attacker detonated an explosive-laden motorcycle, targeting a crowd of both military personnel and civilians who were gathered outside the bank to receive their monthly salaries. The bank branch is located in the heart of a crowded commercial district, Abdulzai said.

No group has claimed responsibility for the attack.