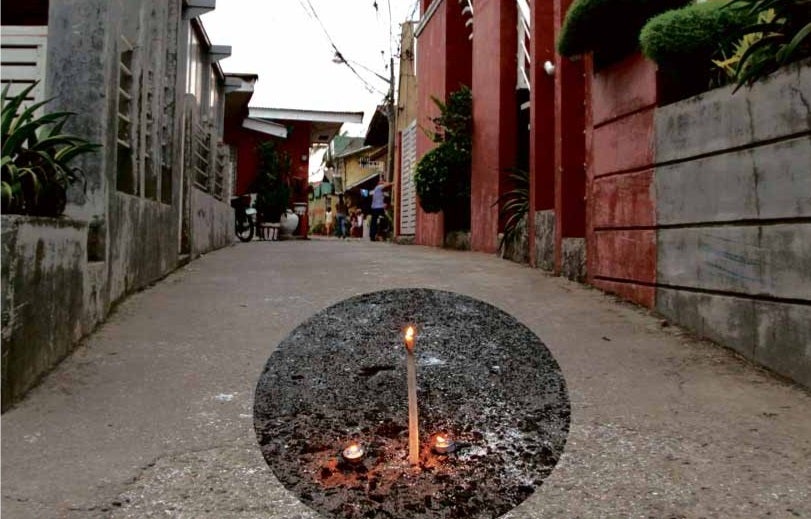 SCENE OF THE CRIME In this composite photo, a candle is lit on the spot in Barangay Balagtas in Batangas City where former INQUIRER correspondent Melinda “Mei” Magsino was felled with a single bullet to her head on Monday. The site is just a few meters from her apartment. RICHARD A. REYES

MANILA, Philippines–Regional Director Constantino Joson of NBI-Calabarzon (Cavite, Laguna, Batangas, Rizal and Quezon) said the bureau had started its own investigation into the murder of former Inquirer correspondent Melinda “Mei” Magsino on orders of NBI Director Virgilio Mendez and Deputy Director Eduardo Villarta even without a formal complaint from the family.

Joson said the investigation was looking at all possible angles, including a “love triangle.”

The family of Magsino said she was killed because of her exposés on the alleged irregularities in the local government of Bauan, Batangas province, the National Bureau of Investigation said on Tuesday.

Magsino, 40, was shot dead by a male assailant at high noon on Monday, just a few meters away from the two-floor apartment she shared with partner Benjie Reyes in Barangay (village) Balagtas. Neighbors said Magsino and Reyes, a chiropractor, had been staying in the apartment for about two years.

Among those whom the police have questioned was Arnold Lubis, Magsino’s husband. Magsino’s cousin, Christine Magsino, earlier told the Inquirer that the couple were seeking an annulment. Magsino did not have a child.

But a police investigator, who refused to be named for lack of authority to speak to a reporter, doubted Lubis’ motive as “he seemed to have already moved on (from the failed relationship).”

“Their last contact was way back in 2008,” the investigator said. The police said Lubis was not tagged a suspect in the killing.

Joson told the Inquirer that Magsino’s relatives had provided the bureau good leads on the possible motive of the killing, including a recording of the shooting that could identify the gunman.

He said the family had given the NBI access to Magsino’s cell phone and social media accounts.

“We are now in the process of gathering and then analyzing the evidence provided by the family,” Joson said.

The NBI regional director added that the family had given the bureau names of possible suspects.

He said the personalities mentioned by the family included local politicians. “We will give them a chance to explain their side [in the spirit of] fair play.”

Malacañang on Tuesday condemned the killing of Magsino, and hailed her as a “crusading journalist while she worked previously as a correspondent” of this newspaper.

In a brief statement, Malacañang said: “Task Force Usig of the Philippine National Police is coordinating intensive police operations to pursue her assailants and bring the perpetrators to the bar of justice.”

Vice President Jejomar Binay urged concerned authorities to ensure that the perpetrators and the brains behind the murder be immediately brought to justice.

“The killing of Melinda Magsino is a tragedy to her family and to our democracy. Ms. Magsino was a local journalist who also used social media to exercise her freedom of expression and her civic duty. For this she was silenced,” Binay said in a statement.

Binay said the safety of journalists should always be guaranteed. “They should remain free from harassment and acts of violence.”

He added that Magsino had feared that she would become just another statistic. “Let us make sure that she does not become another grim reminder of the continued culture of impunity in the country,” the Vice President said.