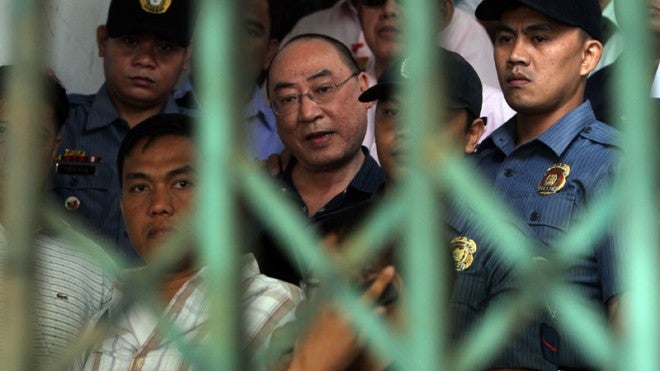 MANILA, Philippines–The Senate hearing on the allegations of corruption against Vice President Jejomar Binay turned into a forum to make a hero of detained Globe Asiatique president Delfin Lee who had been vilified in previous Senate hearings for a P7-billion housing scam.

The hearing of the Senate blue ribbon subcommittee allowed Lee’s lawyer to read a statement accusing Binay of extortion try and the presentation of a lengthy video on Lee’s two housing projects in Pampanga province and testimonials of people vouching for his innocence.

In an interview during the break of the hearing, Sen. Antonio Trillanes IV said the cases against Lee were weak with not enough basis to keep him detained.

“(The case) looks hazy. I was not convinced of the gravity of the case for the person to be deprived of his liberty,” Trillanes said.

The hearing tackled extensively the syndicated estafa cases, which are being heard at the sala of Judge Maria Amifaith Fider-Reyes of San Fernando Regional Trial Court Branch 42.

Berberabe said Pag-Ibig had been holding dialogues with the victims of the double-sale scams who had appealed to them not to force them away from houses they had bought.

The Pag-Ibig Fund had investigated into the housing scam and terminated high-level officials who allegedly conspired with Lee, including its deputy chief executive officer, vice president for Luzon, manager for Pampanga and two other employees as a result, Berberabe said.

“But our agreement was if there is no evidence to implicate them in the syndicated estafa, they should not be included in the case,” Berberabe said.

In Mabalacat City, homeowners claiming to be victims of the alleged P7-billion scam in Lee’s two projects in Pampanga asked Trillanes to stop portraying Lee as a victim.

“It is very, very clear that Delfin Lee duped many home buyers in Xevera (subdivision). He’s not innocent,” said Evelyn Niebres, one of the complainants in the syndicated estafa case against the businessman.

She said it was right that the judge hearing the syndicated estafa case against Lee did not allow the latter to attend Monday’s hearing in the Senate blue ribbon subcommittee to avoid a circus there.

Trillanes, Niebres said, should instead use his authority to bring justice to Lee’s victims.

Niebres said she paid outright P1.537 million in cash for two adjacent units at Xevera in Mabalacat City in September 2009, discovering a year later that the two deeds of assignment were in the name of two women who took out P750,000 loans from Pag-Ibig in the same month.

She said Judge Reyes, who is hearing Lee’s case, had yet to call the victims to the witness stand.

Lee has denied defrauding Pag-Ibig Fund, saying it was the agency that approved the loans. He said he covered the late payments of housing amortization as the project developer.

Niebres believed that Trillanes was “only out to destroy [Vice President] Binay.”

Niebres said she and at least five other home buyers defended Binay because they trust him to help them win their cases against Lee or at least recover their money that they said they earned from working abroad, saved or obtained through loans.

Kris Aquino’s engagement approved by Bimby: ‘He loves you, no agenda’