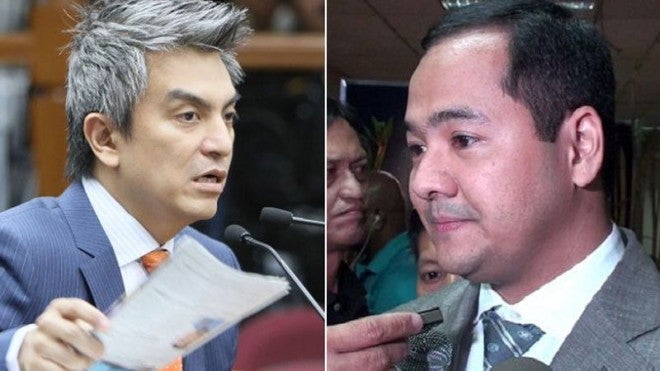 The camp of Vice President Jejomar Binay also slammed Trillanes for allegedly resorting to a “slash-and-burn tactic” to advance his political ambitions.

In a statement issued on behalf of the division, Reyes said he and fellow justices Acosta and Eduardo Peralta Jr. issued the temporary restraining order (TRO) and the subsequent writ of preliminary injunction “acting as a collegiate body” and “after observing a meticulous, impartial and judicious evaluation of prevailing laws, jurisprudence and evidence presented by the parties.”

“Baseless accusations constitute harassment that seek to threaten magistrates in our bounden duty to discharge justice based on fairness, impartiality and the rule of law, and undermines the integrity of the judiciary as an institution and weakens the people’s faith in our legal processes,” Reyes said.

“The judiciary must be insulated from partisan politics. We dispense justice based on the rule of law and established evidence, and will continue to do so,” the justice added.

The Villaraza & Angangco (V&A) law firm also vehemently denied that one of its senior partners, Pancho Villaraza, facilitated the supposed payoff at the Court of Appeals that Trillanes exposed in a resolution Monday calling on the Senate to look into alleged “justice for sale” in the judiciary.

“Mayor Binay is not a client of the firm, and specifically, the firm does not represent the mayor in the cases filed against him,” he said, adding that it appeared that Trillanes was being “misled and dragged” by adversaries of the firm into the private commercial dispute referred to by the senator in his resolution.

“In the spirit of fairness and in accordance with due process, we challenge Senator Trillanes to reveal who his ‘reliable sources’ are, and more importantly to produce proof to support his libelous statements,” Somera said.

Lawyer Vicente Joyas, president of the Integrated Bar of the Philippines (IBP), said complaints against the justices should be addressed to the Supreme Court, which has the proper jurisdiction to handle these cases.

“Complaints of this nature are supposed to be confidential. The moment they initiate the hearing [at the Senate] it is no longer confidential,” Joyas told reporters.

Joyas said the IBP will hold a meeting next week on alleged corruption in the judiciary. He invited Trillanes and those who claim to have information about judicial corruption to attend the meeting.

“If they have evidence we will help them [in filing cases], but we need hard evidence, not hearsay. If there is evidence, we sue; if there are none, let us stop insinuations [about corruption] because the judiciary as an institution is being tarnished,” Joyas said.

“Senator Trillanes has once again showed the people that he would rather destroy and vilify an independent and coequal institution like the judiciary just for his personal motives,” Rico Quicho, spokesman for Vice President Binay, said in a statement.

The lawyer said Trillanes had “irresponsibly” tarnished the judiciary “with his innuendos and cheap shots” and was engaged in nothing more than “bullying.”

“(It gives) the impression that if a court does not issue a decision to his liking he will use his immunity to malign and threaten them with a Senate investigation under the guise of it being in aid of legislation,” Quicho said, describing the senator as someone with a “Messianic complex.”

Navotas Rep. Tobias Tiangco, interim president of United Nationalist Alliance (UNA), said Trillanes should file a case in court if he has evidence of the alleged bribery instead of hiding behind the cloak of parliamentary immunity without any shred of evidence to support his charges but just the word of his “imaginary” sources.

“If he (Trillanes) really has evidence, the simplest thing for him to do is to file bribery charges in court,” Tiangco said.

Tiangco said Trillanes was practically urging the Senate to investigate a coequal branch with hardly any proof to back up his charges.–With reports from Niña P. Calleja and Gil C. Cabacungan