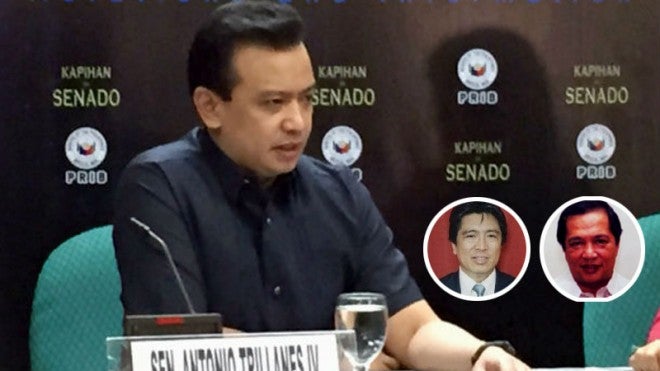 MANILA, Philippines–Sen. Antonio Trillanes IV on Monday refused to name his sources but he named straightaway the two Court of Appeals justices who allegedly received a P25-million bribe each to stop the Office of the Ombudsman’s suspension of Makati Mayor Jejomar Erwin “Junjun” Binay Jr. on corruption charges.

Trillanes, in a resolution filed Monday calling on the Senate to conduct an investigation into a purported “justice for sale” system in the judiciary, identified the magistrates as Justices Jose Reyes Jr. and Francisco Acosta, two of the three justices from the Sixth Division who signed the court rulings in favor of the son of Vice President Jejomar Binay.

The third magistrate, whom Trillanes did not accuse of wrongdoing, was Eduardo Peralta Jr. The senator told reporters that his information indicated that Peralta was not involved in the alleged bribery.

“According to reliable sources privy to the matter, a lawyer by the name of Pancho Villaraza facilitated the transaction and talked to Associate Justices Reyes and Acosta,” he said in his resolution.

He alleged that Reyes and Acosta first received P20 million each for the temporary restraining order (TRO) stopping the Ombudsman’s 60-day suspension of Binay pending its investigation into the alleged overpriced Makati City Hall Building II.

But when the Ombudsman, Department of Justice and Department of the Interior and Local Government refused to recognize the TRO, a second transaction supposedly took place, Trillanes said.

He alleged that Reyes and Acosta got another P5 million each upon the subsequent issuance of an injunction.

“This was purportedly the reason why the concerned CA division issued the writ of preliminary injunction with undue and inordinate haste, long before its TRO was supposed to elapse,” he said.

In an interview with reporters, the senator declined to identify his supposed sources.

Crimes like bribery, Trillanes said, usually do not have documentary evidence and instead can be shown through eyewitness accounts.

As for the threat that the Binay camp would ask that he be cited in contempt, he said it could do what it wants.

“I don’t care. Maybe that’s just a boast just like when I was challenged to a debate. They could do it, but I will run after them,” he added.

“There are many things we could do. What we want is to stop such a practice,” he said. The senator referred to the conviction and ouster of Chief Justice Renato Corona after an impeachment trial in 2012.

Trillanes also said in his resolution that based on published reports, Villaraza appears to be a “very powerful and influential lawyer, who is allegedly a known political operator with deep links among politicians as well as members of the judiciary and the prosecution service.”

Villaraza supposedly helped secure the appointments of these prosecutors, judges or justices during the terms of Presidents Fidel Ramos and Gloria Macapagal-Arroyo, he added.

Trillanes also said there were published accounts stating that Villaraza’s decision to join and support Vice President Jejomar Binay’s campaign for the presidency was one of the principal reasons that led to his falling out with his former partners and the dissolution of their decades-old partnership in the high-powered law firm known as “The Firm.”

“In view of the foregoing very alarming information and assertions, there is an urgent and imperative necessity to conduct an investigation into these very damaging allegations against members of the judiciary and judicial system as a whole,” he said.

Trillanes initiated the long-running Senate probe against the Binays.

The Binay camp has accused Trillanes of leading the inquisition to further his own political ambitions and to bring down Vice President Jejomar Binay, who has been leading voter preference surveys for the presidency. Trillanes is allied with Interior Secretary Mar Roxas, who is likewise seeking the presidency.