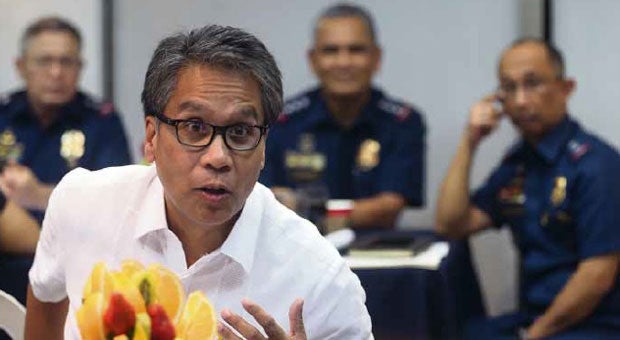 A Liberal Party (LP) stalwart on Saturday said Interior Secretary Mar Roxas remains the ruling party’s presidential candidate, even as he dispelled rumors that President Benigno Aquino III is having second thoughts about endorsing his former running mate to be his successor in 2016.

Budget Secretary Butch Abad, an LP stalwart, said the report about the President telling Roxas in a meeting that he should do something to improve his survey ratings appeared to have been “a bit overblown,” particularly because of the implied tone of Mr. Aquino in the news story.

Abad, who did not say he was at that meeting, said what the President was suggesting was that everyone should buckle down to work.

“Of course, Mar is still our candidate,” Abad said. “It is true that the numbers do not favor Mar. But with 15 months [to go], those numbers can change. The President discovered that himself when he decided [to run] with only eight months to go,” Abad said.

“The President is saying that we are only a few months from October,” Abad said, referring to the date of the filing of candidacies for next year’s national elections.

“He is saying let us give this some time and let us support Mar,” Abad said.

Abad said Roxas had not yet declared his candidacy just as the President had not yet made any endorsement.

Abad said it had been difficult for politicians to discuss next year’s presidential elections after the Mamasapano massacre, which had affected the peace process between the government and the Moro Islamic Liberation Front.

“At this time, the elections would be the least of our people’s concerns,” Abad said.

But Abad remains optimistic about the chances of Roxas to win the presidency next year.

He said once political parties prepared for the elections, they should be taking into consideration the people’s mood in 2016.

“We should listen to the people. What would be the mood in 2016? What is the predominant issue? Is it still corruption? Or is the issue, have we already succeeded in addressing corruption and so we would want someone with experience and competence to continue the gain. You read those things, then you choose your candidate,” Abad said.

On how the President’s own falling ratings would affect his endorsement of Roxas, Abad said the surveys on public satisfaction were conducted during “a period of a lot of anger, sadness and frustration.”

“But we have to remember that emotions are fleeting and those feelings pulled him down… It is really unfair that the President is being defined by one crisis,” Abad said.

Abad said President Aquino had done so much not only in improving the country’s economy but also in institutionalizing good governance.

But Binay’s camp said the presidential elections would be “about competence, genuine compassion for the poor and readiness to lead the country.”

“Vice President Binay offers to the people his track record of service in Makati when he was mayor and as vice president of the Republic. Secretary Roxas should similarly offer his track record at the Department of Transportation and Communications and the Department of the Interior and Local Government, and let the people judge in 2016,” Binay spokesperson Joey Salgado said.