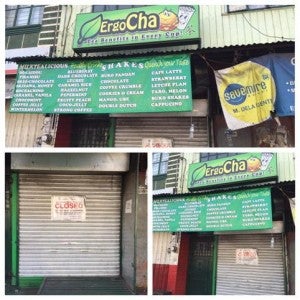 The Food and Drug Administration (FDA) is focused on determining whether the milk tea, which left two people dead in Manila, contained cyanide substance.

“Right now our tests are focused on cyanide, given how fast the effect of the substance was to the victims,” said FDA officer in charge Nick Lutero in a phone interview.

“Food poisoning per se usually doesn’t have such fast effect on people. If it was just a case of spoiled milk tea or any other food, I doubt if it would be fatal. But in this case, the victims died in a matter of minutes,” he added.

The Manila Police District submitted the milk tea specimen to the FDA last Friday, Lutero said, adding that the result of the tests is expected to be released on Sunday or Monday.

“Our staff is working overtime over the weekend. Our central laboratory is usually open even on weekends when we have situations such as this,” he said.

According to him, the FDA started analyzing the specimen despite the lack of requirements from the MPD.

“When the specimen was brought to us, there was no medical abstract, no narrative of what happened, no information regarding the symptoms experienced by the victims. Those requirements would have made the analysis of the specimen easier. Without those information, we’ll be compelled to test the specimen for all substances, which is more difficult and time-consuming,” Lutero said.

Nevertheless, the FDA decided to conduct the tests, focusing on cyanide tests first.

“In the interest of public safety, we decided to proceed with the tests,” the FDA official said. “Should the test yield negative result for cyanide, then we will proceed with other tests for other substances.”

Lutero also allayed concerns of the police that the period within which the specimen was tested from the time it was submitted to the FDA by the MPD already affected the condition or the state of the sample milk tea.

“The specimen was well preserved. Our laboratory has a way of doing that,” he said.

On Thursday, within three minutes of consuming the Hokkaido-flavored milk tea that he himself had prepared, William Abrigo, owner of ErgoCha Milk Tea House on Bustillos Street in Sampaloc, collapsed on the floor of the eatery.

Earlier, before Abrigo collapsed, customer Suzaine Dagohoy and her boyfriend Arnold Aydalla had complained the milk tea that Abrigo had served them was foul-tasting. This prompted the store owner to taste the drink.

Dagohoy died two hours after Abrigo had collapsed, according to the police. Aydalla was later described to be in stable condition. RC