‘Peace is justice for all’: Aquino calls anew for passage of BBL 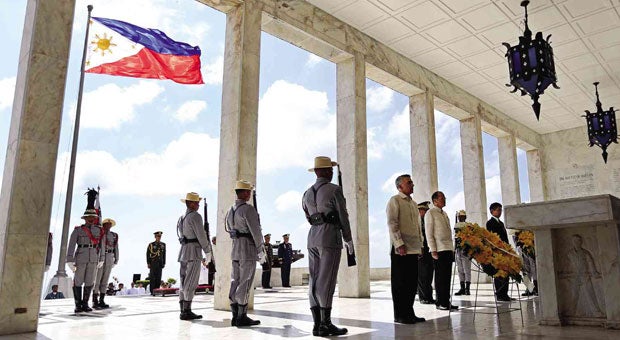 PARTNERS IN PEACEMAKING President Benigno Aquino III stands united with US Ambassador Philip Goldberg and Japanese Ambassador Kazuhide Ishikawa during the wreath-laying ceremony at the Mt. Samat Shrine in Pilar, Bataan province, at the 73rd anniversary of the Day of Valor (Araw ng Kagitingan) on Thursday. RAFFY LERMA

Drawing from the lessons of World War II, President Benigno Aquino III made another pitch for peace in Mindanao and appealed anew for the passage of a law that would establish an autonomous Bangsamoro region.

“Conflict can only lead to more suffering and misunderstanding, while solidarity brings widespread benefit. This is the same lesson that leads us to champion lasting peace in Mindanao, and to call for the passage of the Bangsamoro Basic Law (BBL),” Mr. Aquino said.

The President led the 73rd anniversary of Araw ng Kagitingan (Day of Valor) at the Mt. Samat National Shrine in Pilar, Bataan province, recognizing the heroism of the Filipino and American forces who fought Japanese invaders in 1942.

A handful of surviving veterans and their families were present at the commemoration of the Fall of Bataan.

Following tradition, the President laid a wreath for the fallen heroes at the shrine.

The Philippines and the United States were allies in the war, with hundreds of Filipino and American troops dying in the infamous Death March that followed the capture of Bataan by the Japanese.

“In coming together to foster stability in Mindanao, all the more are we able to widen the scope of opportunities available to our countrymen. In doing this, no one will be driven to join radical factions, terrorist groups, and others interested only in pursuing their selfish agendas,” Mr. Aquino said.

“Two generations have already suffered due to the violence that has dominated Mindanao. Now that we are here, we will not allow succeeding generations to suffer the same fate. However hard our task may be, whatever challenges we may face, we will continue to pursue peace, because this is the way to obtain justice for all,” he added.