Home visits of veterans’ hero save gov’t billions of pesos 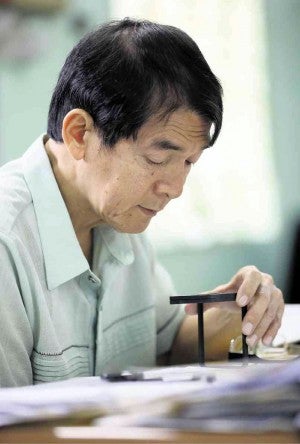 The clock strikes 5 in the afternoon. While other regular employees are homebound, PVAO fingerprint specialist Ronaldo Ignacio is not.

Waiting at his office in Camp Aguinaldo is Aling Nena, not her real name, who volunteered to accompany Ignacio to the house of Elpidio Bayani (not his real name), a former World War II guerrilla who can neither walk nor see and suffers from Alzheimer’s disease. Both ride a jeepney to Marikina.

Ignacio’s designation posted on his desk: Public servant. His mission: Take Bayani’s fingerprint samples and verify his identity so he can again receive his pension.

The last time the 86-year-old Bayani visited the PVAO, his wallet was stolen, along with his identification cards and some money, while walking at the MRT Santolan station. Now, he cannot walk, like his hearing-impaired 90-year-old spouse, Nanay Maria (not her real name), and would need Ignacio’s free service. The P5,000 monthly retirement pension is their sole source of food and medication.

After an hourlong jeepney ride and walking, Ignacio starts taking samples of Bayani’s fingerprints. Meticulously dealing with the pensioner who is often sensitive and irritable, Ignacio makes sure the fingerprints are readable enough to validate his identity. If fingerprints do not match with the PVAO’s old records, retirement pension and benefits are forfeited.

Until house visits were incorporated to Ignacio’s regular duty, years ago, it was out of Ignacio’s sympathy for the veterans and respect for their heroism that inspired him to walk and visit the houses to get fingerprint samples—with or without compensation.

“Some veterans are rich; most are poor. Some would give me money for fare; some wouldn’t. Others would not even bother to give water. But it doesn’t matter. One should be prepared for anything,” he said.

Ignacio recalled entering a foul-smelling house since some of the pensioners were even peeing on their bed out of old age. Some would not even want to be touched, would hit him, shout at him. But others would get fond of him and would not let him go.

“This is my way of giving back to our heroes. They sacrificed their lives and freedom for us. Most of them are in dire and pitiful conditions now. They are very sickly and alone,” he added.

Bayani is just one of the 186,860 active pensioners depending on PVAO’s monthly pension and benefits. Most of the veterans are sickly and can no longer walk and rely on Ignacio’s home visits.

As of February 2015, there are 142,358 old-aged veterans who served during the World War II, Korean War and Vietnam War. Eighty-one percent of these pensioners are already surviving spouses. Meanwhile, there are 76,026 postwar veterans (67.4 percent are surviving spouses) who served in the Armed Forces of the Philippines for a minimum of six years. Also given pension are former soldiers of the defunct Philippine Constabulary and those of the Coast Guard and Philippine Army.

According to the PVAO public relations head, Jet Rivera, the spouse and minor children of a veteran killed in action have an additional P1,000 monthly allowance.