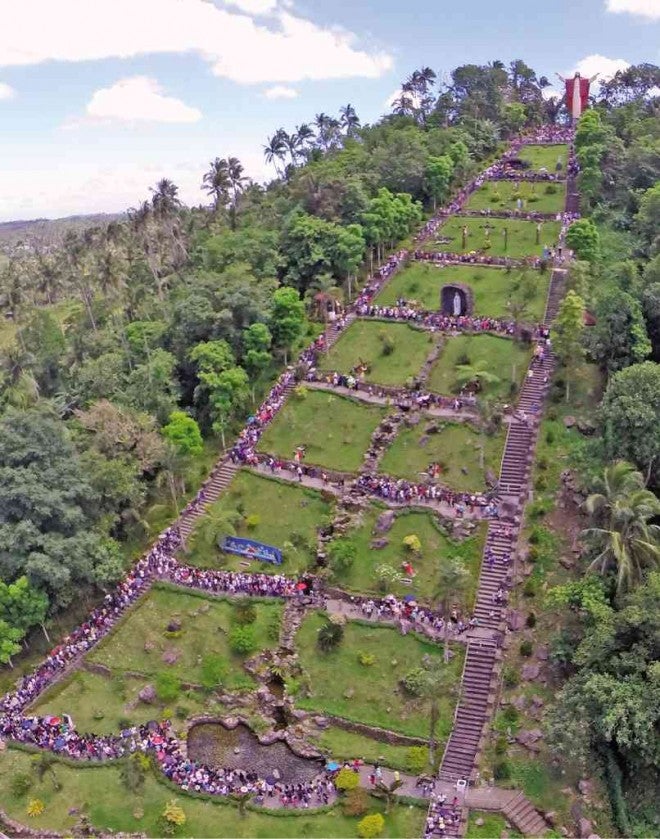 BIRD’S-EYE VIEW of the Kamay ni Hesus shrine in Lucban, Quezon showing the queue of people waiting to reach the image of the Risen Christ on Good Friday. DELFIN MALLARI JR./INQUIRER SOUTHERN LUZON

LUCBAN, Quezon—A shrine here being administered by a priest with a huge following because of belief in his healing powers has drawn between one to three million pilgrims during the Holy Week, according to police and the priest.

Fr. Joey Faller, administrator of the Kamay ni Hesus (Hand of Jesus or KNH) shrine, attributed the popularity of the shrine to continuing faith in the Catholic religion that received a boost from the visit of Pope Francis in the country in January.

Faller said the pilgrims included young people who, he said, had been drawn closer to Catholicism by Francis’ visit.

The youth, said Faller, composed majority of this year’s Lenten visitors to the shrine.

“They now find themselves wanting to reach out to the Lord,” said Faller. “Inside the shrine, one can experience talking to Him,” he said.

A teenage boy, after kissing the ground upon arrival at the shrine, said he wanted to become a priest.

On Holy Thursday and Good Friday, there was no break in the long line of pilgrims waiting for their turn to climb the 300-step stairway leading to a 50-foot statue of the Risen Christ.

Pilgrims had to wait up to three hours to enter the gate leading to the stairway.

Quoting security personnel, Faller said the number of pilgrims who came to the shrine could reach three million.

The shrine is under the supervision of the Diocese of Lucena headed by Bishop Emilio Marquez.

The compound kept its gates open 24 hours on Holy Thursday and Good Friday. On regular days, the shrine is open from 6 a.m. to 6 p.m.

Read Next
Iqbal lists 5 scenarios if Bangsamoro bill is scrapped
EDITORS' PICK
Metro Manila to remain under COVID Alert Level 2 until December 15
IATF tightens border control, suspends entry of fully vaxxed nationals from ‘green’ countries
Legarda: Ending Violence Against Women, a cause for all
Duterte open to making jabs mandatory; Cabinet mulls ‘pressuring’ the unvaccinated
Villar Group gears up for AllValue Shopping Party on Dec. 3; around P 1-million promos and discounts up for grabs
A delightful blessing!
MOST READ
Quiboloy warns of ‘much worse than Omicron virus’ if his ‘persecution’ is not stopped
Omicron poses ‘very high’ global risk, countries must prepare–WHO
IATF tightens border control, suspends entry of fully vaxxed travelers from ‘green’ countries
Marcoleta defends pol ads on ABS-CBN
Don't miss out on the latest news and information.