Malaysian mom under fire for texting while daughter falls to death 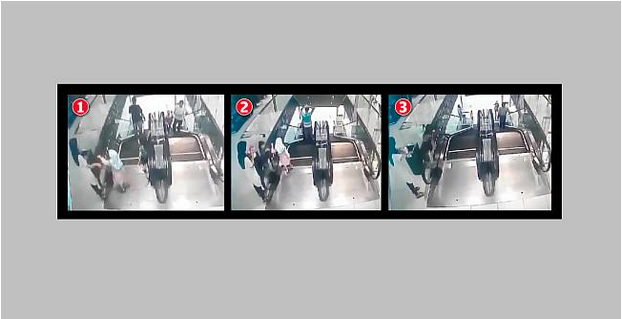 Caught on camera: A grab from the CCTV showing Nurhayada climbing over the balustrade (2nd picture) and falling through the gap between the banister and escalator.

KUALA LUMPUR—The mother of six-year-old Nurhayada Sofia Musa is in the spotlight after a CCTV footage of her fiddling with her phone shortly before the girl fell to her death sparked outrage among Malaysians on social media.

In the minute-long footage, Nurhayada could be seen playing near the escalator on the second floor of Kenanga Wholesale City Mall with her sister and her mo­­ther nearby.

The mother had earlier been on the phone and then seemed to start texting. Later, the girl was seen climbing over the banis­ter and falling through the gap between the balustrade and the escalator.

Nurhayada’s mother, who was until then still fiddling with her phone, ran down the escalator with her other daughter trailing after her.

Also under investigation is the possibility of negligence by Nur­hayada’s mother.

“We hope the public refrains from speculating on the matter,” he said.

A source close to the investigation said police had already questioned the victim’s parents.

Their statements were taken to facilitate investigations into the case, which was classified as “sudden death” with no elements of foul play.

“If we receive instructions to reclassify the case as negligence under the Child Act, we will do that,” said the source.

“There should be a barrier to prevent anyone from entering the space,” he said.

But he pointed out that parents who brought children to public places must also keep an eye on them.

A spokesman of the mall yesterday declined to comment on the issue until police investigations were completed.

Association of Registered Child­care Providers Malaysia president P.H. Wong called on shopping malls to have child protection policies at their buildings so that they could minimize risk of accidents.

“It is also ultimately the duty of parents to look after their young children. The parents cannot assume that the kids can take care of themselves,” she said.