A WITNESS and former employee of Janet Lim-Napoles again drew criticism before the Sandiganbayan for being inconsistent in her testimony over the alleged pork barrel scam.

During the bail hearing of detained Senator Jose “Jinggoy” Estrada for plunder Monday, Merlina Sunas told the antigraft court Fifth Division that she could not recall if she received commissions from principal whistleblower Benhur Luy, pertaining to the latter’s alleged hidden transactions.

She responded to the cross examination of Atty. Lanee David, representing Napoles, who asked Sunas if she received money from Luy when she allowed the latter to use the Napoles-linked NGO People’s Organization for Progress and Development Foundation (POPDFI) for his own supposed hidden transactions with Pauline Labayen. Labayen is Estrada’s deputy chief of staff who fled her plunder case. 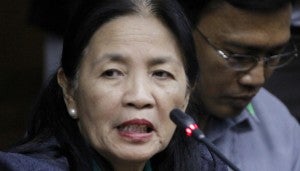 Sunas had admitted allowing Luy to use POPDFI, which she presided over, as front for opening a Maybank account for his alleged hidden transaction, which Labayen kept from Napoles.

Napoles, the accused pork barrel scam mastermind, according to Sunas, had a falling out with Luy when she found out about the covert deals. Before he turned state witness, Luy had been allegedly detained by Napoles on suspicions of starting his own scam.

“Did you receive money from Benhur Luy in (allowing him to) use POPDFI?” David asked Sunas.

“I cannot recall,” the witness answered.

But this runs counter to her earlier testimony before the antigraft court Third Division hearing Napoles’ bail petition when she testified that she received P50,000 in commissions from Luy for helping in the secret deal.

“Hindi ko alam kung sarili niyang transactions ‘yun,” Suñas then said on allegations that Luy has his own scam to rival Napoles. “As far as I can recall, binigyan ako ni Benhur ng P50,000. Once lang ‘yun.”

David said she wanted to impeach the credibility of the witness for her inconsistencies.

“She’s telling different stories before the court… Are you changing your answer now?” David said.

Associate Justice Roland Jurado was noticeably irked when the witness kept on saying she could not recall details when it comes to allegations pinning her to the scam.

“Why is it that when the question is about you, you always say ‘I cannot recall,’ but when in other matters you recall in detail?” Jurado asked Sunas.

Sunas then admitted that she received kickbacks from Luy.

Justice Undersecretary Jose Justiniano, who is helping the prosecuting team in the case, said Sunas’ “minor” inconsistency is not a blow to her credibility and will not in any way help the defense in the case.

“Our witness has immunity from any prosecution related to the (pork barrel scam),” Justiniano said. “If the testimony has no inconsistency, that is of suspect. It means it is scripted,” he added.

He said the defense instead should have presented documents to Sunas to refresh her memory in case of inconsistencies.

The witness earlier drew the ire of the antigraft court Third Division for having selective memory when she could not recall the details pertaining to the alleged rounds of Napoles in the House of Representatives through her alleged agent former Pampanga Representative, now Energy Regulatory Commission chair Zenaida Ducut.

Estrada and Senator Ramon Revilla Jr. are under police custody at the Philippine National Police Custodial Center in connection with the pork barrel scam. Another accused Juan Ponce Enrile is under hospital arrest in Camp Crame.

Napoles, meanwhile, is detained at the Camp Bagong Diwa in Taguig with other co-accused former representatives Rizalina Seachon Lanete and Edgar Valdez.