No casualties reported in ‘Chedeng’ – NDRRMC

MANILA, Philippines – The National Disaster Risk Reduction and Management Council said there were no casualties so far from the onslaught of  “Chedeng,” which weakened as it approached the country.

NDRRMC undersecretary Alexander Pama said they have not received reports of casualties from the weather depression, which made landfall in Isabela on Sunday morning. 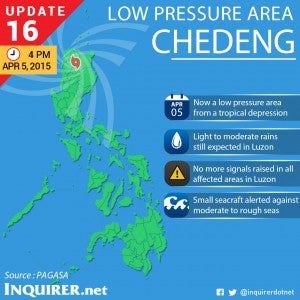 “We are still monitoring its effects. We are not yet in a hurry to downgrade our alert status to blue alert,” the official said in a press briefing.

Last week, the agency declared a red alert in preparation for the weather disturbance, then a typhoon, as it was expected to hit the country during the Holy Week.

Citing data from the state weather bureau, the NDRRMC said the weather disturbance would remain stationary and would weaken further into a low pressure area within the next 24 hours.

Although public storm warning signals have been lowered save for Isabela, Aurora, Quirino and Polillo Island, which are still under signal number 1, authorities warned fisherfolk against going out to sea.

He added that families preemptively evacuated from dangerous zones in Isabela and Aurora have begun going back to their homes on Sunday.

Travelers making their way back to Metro Manila after the Holy Week break may travel although Pama said extra caution should be exercised in view of the weather disturbance.

As of Saturday night, 361 passengers, 20 sea vessels, 76 motor bancas, and 21 rolling cargoes were reported stranded due to Chedeng.

Meanwhile, four people were reported dead as of Sunday morning in the NDRRMC’s monitoring of the Holy Week break.

Two of the four fatalities drowned in Bukidnon province in Northern Mindanao last March 29 with their bodies only recovered on April 1.

A man died in a vehicular accident in Lanao del Norte while another was killed in a grenade explosion in Bukidnon.

The NDRRMC recorded 26 people injured during the Holy Week break, eight of which were tourists who were hit by big waves at a stony beach in Baler, Aurora last April 3.

Meanwhile, 17 were hurt in a vehicular accident in Lanao del Norte. SFM/AC