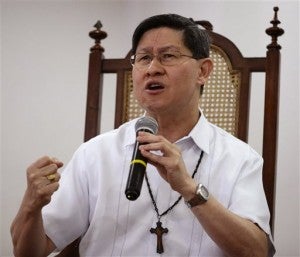 Everybody must learn to pray, according to Manila Archbishop Luis Antonio Cardinal Tagle.

The Pope, Tagle said, wakes up at 4:30 a.m. and starts praying. At 6:30 a.m., he is ready for Mass. At midday he says prayers and does an examination of conscience. Before going to sleep, he spends another hour praying before the Blessed Sacrament.

“That’s the Pope, a very busy person,” Tagle said, noting that the busier one is, the more one needs to pray.

When one prays, even an ordinary event takes on a divine nature. God gives it meaning, Tagle said as he opened the parish-wide Lenten Recollection of St. James the Great at Ayala Alabang Village on Monday.

“Jesus opened Himself to God through His prayer,” Tagle said.

The human in Jesus, Tagle said, asked that He be spared the pain of what lay ahead, but that not His, but only the Father’s, will be done. In the end, Jesus’ prayer “transformed His death from being the loss of life to a giver of life.”

Prayer can be described as a “cry from the heart, a groaning … but sometimes it is depicted as just silence.” One does not even have to express prayer in words, Tagle said.

He recalled seeing a man who looked like a beggar kneeling at the foot of a cross in a church one Good Friday. As it was Lent, all the images in the church were covered in purple.

The man’s hand, Tagle said, “was straining to hold on to Christ. His face was covered with tears. There were no words. He was just a child with no one to turn to. Whatever that person might have been going through, the Father has seen, heard and understood.”

The Bible, Tagle said, is “still the best guide” for a life of prayer. “It is full of the prayer life of individuals and communities, their histories … it is God teaching us how to pray,” he said.

The recent bar topnotcher’s attributing “90 percent” of her success to prayer endeared her to many and showed “there is hope for lawyers,” Tagle said. “If only they will pray.”

Tagle urged parents to teach their children to “fall in love” with the Lord’s Prayer, the Our Father.

Only God’s name should be “hallowed” or praised, Tagle reminded his audience. When one prays “Thy will be done,” it means not letting one’s pride and ambition rule, he said.

“Give us this day our daily bread” mean’s a day’s—not a month’s—supply of bread. A month’s supply would mean hoarding and just lead to waste, he said.

Tagle urged church organizations to avoid “compartmentalizing” activities, such that praying is confined to only a group named as the prayer warriors. But all should pray, he stressed.

Organizing committee members get disorganized when they do not pray, and lectors may just be overly concerned with “DICshun,” Tagle said, configuring his mouth to illustrate and drawing laughter from the congregation.

Tagle tied prayer to mission. “The prayer of Jesus clarified for Him His mission. His mission was a product of his prayer. We pray to discern what God wants for us. Our mission, our service to the community, can’t be clarified if we don’t pray,” he said.

Jesting, Tagle said it might be “dangerous to pray” because one might hear God, which could make one change one’s priorities. But be ready for such an experience, he said. St. Francis of Assisi sold all his belongings. St. Teresa of Avila knew she needed nothing in life but God. With prayer, one will realize that “God suffices,” he said.

In closing, Tagle, whose archdiocese hosted the recent visit of Pope Francis to the Philippines, told about how a prayerful life may have deeply influenced the Pope’s life as a pastor today.

He said that amid the wildly warm reception the Pope experienced—from his arrival at the airport and through the ride on the popemobile to the Papal Nunciature—Francis was actually “praying, looking for the presence of God.”

Was it in the crowds that greeted him? Tagle recalled that before getting off the popemobile, the Pope asked him, “How much did you pay those people to come out and greet me?”

“In cases like that, you must answer quickly,” Tagle said. He said that thinking the Pope was joking, he replied, “We promised that all of them will go to heaven.”

Tagle said that according to the Pope, “St. Ignatius of Loyola said that we need instruments to touch hearts but only God can go directly to touch the heart. It was God touching hearts.”

“That is a prayerful attitude,” Tagle said. “That probably got developed through years and years of praying.”