MMDA won’t back ‘no plate, no travel’ | Inquirer News

MMDA won’t back ‘no plate, no travel’ 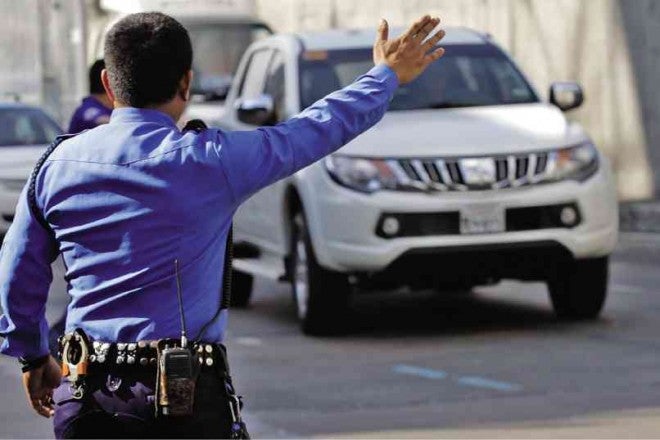 AN LTO ENFORCER flags down a pickup without a license plate on Edsa in Cubao, Quezon City, on the first day of the implementation of the agency’s “no plate, no travel” policy. Violators face up to P10,000 in fines on top of the impounding of their vehicles. LEO M. SABANGAN II

MANILA, Philippines—The Land Transportation Office (LTO) may find it hard to implement the “no plate, no travel” policy in Metro Manila without the help of the Metropolitan Manila Development Authority (MMDA) and local government units (LGUs).

According to MMDA Chair Francis Tolentino, the LTO policy which took effect nationwide on Wednesday was unconstitutional and “un-Christian” and his agency wanted no part of it.

“Our traffic enforcers and those from the 17 LGUs in Metro Manila have agreed that we will not apprehend brand new cars without plate numbers,” Tolentino told reporters, adding that they wanted to allow people to go home to the provinces for Holy Week.

He said that the LTO policy may be unconstitutional as it prohibited people from using their own vehicles.

“It is stated in the constitution that no person shall be deprived of life, liberty or property without due process of law and their new car is their property which is registered and has insurance,” Tolentino added.

According to him, the policy was both untimely and “un-Christian” as he urged the LTO to give motorists some consideration “especially [since] they are going home to their provinces with their family.”

Tolentino said that he had sent a letter to the LTO about the MMDA’s stand, adding that the crackdown should be on old cars without license plates.

Sought for comment, the LTO said it would go on with its implementation of the no plate, no travel policy despite the opposition of the MMDA.

“We respect their opinion but we’re just implementing the law. They need to respect that as well,” LTO spokesperson Jason Salvador told the Inquirer on the phone on Wednesday.

“The policy is not new,” he said, adding that the Land Transportation Code clearly stated that all motor vehicles should be registered within seven days of the sale.

Salvador pointed out that driving unregistered vehicles would only “aggravate” motorists as they would not be able to file a claim if they meet an accident or fall victim to car thieves.

He noted that the stricter implementation of the policy would serve to “instill discipline” among motorists and car dealers.

Under Memorandum Circular No. AVT-2015-1927 issued by the LTO on March 20, four-wheeled vehicles still without license plates by April 1 may be stopped by traffic enforcers.

The owner will be fined P10,000 for using an unregistered vehicle and the driver P1,000 for reckless driving unless they can present documents showing that the vehicle has been registered or is undergoing the seven-day registration process.

If the apprehended driver can present only the certificate of registration and official receipt, he will still face a P5,000 fine for failing to attach the license plate to the vehicle.

Tolentino, meanwhile, said that it was not the fault of the owners if they had yet to be issued license plates although their vehicles were already registered with the LTO.

“They should not be penalized for not having their license plates on time; they already have their conduction stickers. They are paying their monthly amortization and have no deliberate intention to violate the law,” he added.