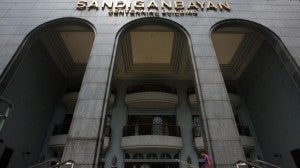 The Sandiganbayan has dismissed for lack of merit an attempt by Sen. Jinggoy Estrada to block the garnishment of his properties in connection with the P184-million plunder case brought against him by the Ombudsman.

The ruling of the antigraft court’s Fifth Division came after Estrada’s lawyers had earlier successfully blocked discussion of the Anti-Money Laundering Council (AMLC) investigation into the senator’s financial transactions due to flaws in the prosecution’s presentation of its witness.

Estrada, who is in detention at Camp Crame, is facing plunder charges along  with Senators Juan Ponce Enrile and Bong Revilla as well as alleged P10-billion pork barrel scam mastermind Janet Lim-Napoles. All are under police detention while their bail petitions are being heard.

In upholding its Feb. 17 order granting the Ombudsman’s petition for a writ of preliminary attachment, the Sandiganbayan said the arguments raised by Estrada in his motion for reconsideration were “unmeritorious.”

A writ of attachment or garnishment is similar to a freeze order issued by the courts while a trial is going on.

The court said the prosecution was right when it argued that the writ was “conservatory in nature” and intended to avoid the “further dissipation, disposal or removal of [Estrada’s] funds and properties.”

“[T]here is no compelling reason to lift the attachment while the main case is still pending,” the antigraft court said in its March 26 resolution, a copy of which was given to media yesterday.