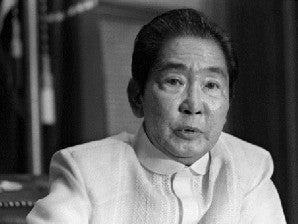 Justice may grind slowly, but grind it does.

Three “business associates” of the late strongman Ferdinand Marcos have been sentenced by the Sandiganbayan to up to 90 years in prison each for receiving behest loans totalling P36 million from 1972 to 1980.

Marcos, his family and other cronies fled the Philippines in February 1986, driven out by People Power.

Found guilty of nine counts of violation of Republic Act No. 3019, the Anti-Graft and Corrupt Practices Act, were Leticia Teodoro, Marfina Singian and Gregorio Singian, all former executives of Integrated Shoes Inc. (ISI).

Each count carries a maximum penalty of up to 10 years imprisonment.

The Presidential Commission on Good Government (PCGG) had identified the shoe company as one of the 419 private firms that were granted “friendly waivers” by the Marcos regime when they applied for billions of pesos in loans from the government.

“(A)ll loans subject of this case were granted despite the failure of ISI to raise working capital and put up additional collateral,” the court said in its 36-page resolution dated March 26.

“The evidence showed the loan transactions with ISI were grossly and manifestly disadvantageous to the government because ISI lacked sufficient capitalization and adequate collateral,” it added.

The resolution was penned by Presiding Justice Amparo Cabotaje-Tang, chair of the special division, and was concurred in by Associate Justices Alex Quiroz and Ma. Theresa Dolores Estoesta.

“In this case, the prosecution established that there was a conspiracy among the accused when the PNB granted several loan accommodations in favor of ISI,” it said.

Records showed that ISI received more than P36 million in loans from the PNB during an eight-year period from January 1972 to August 1980.

This despite the fact the company had declared paid-up capital of only P1 million with the Securities and Exchange Commission.