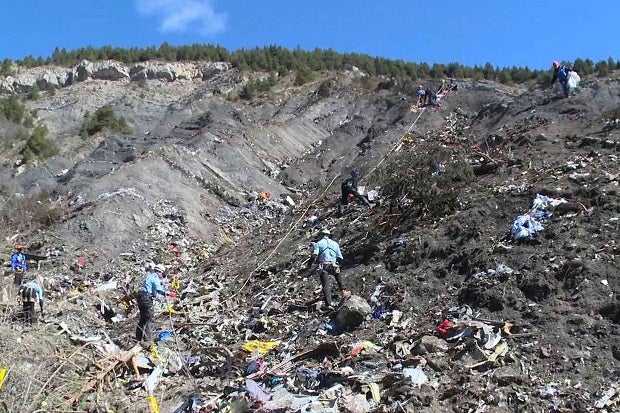 This screen grab taken from a handout video released by the French Interior Ministry on March 26, 2015 shows forensic experts of the French gendarmerie looking for the black box or clues on the site of the March 24 crash of a Germanwings Airbus A320 in which all 150 people on board were killed. AFP / MINISTERE DE L’INTERIEUR

BERLIN, Germany – The Germanwings flight started like any other, the conversation in the cockpit normal, with co-pilot Andreas Lubitz offering no indication of the horror he would allegedly inflict.

This is how Flight 4U 9525, which investigators believe Lubitz deliberately steered into a French mountainside, unfolded according to French prosecutors and Germany’s Bild newspaper.

Both accounts are based on information from the cockpit voice recorder captured by one of the black boxes discovered among debris of the Airbus A320 that crashed in the Alps Tuesday.

BACKSTORY: Jet crashes in Alps with 150 aboard; no survivors expected

– Captain Patrick S. apologizes to passengers for a 26-minute delay in take-off and says they will try to catch up the time during the flight from Barcelona to Duesseldorf, Sunday’s Bild said.

– The plane took off at around 10am local time and for the first 20 minutes the pilots “spoke in a normal fashion, courteous, like normal pilots. There was nothing abnormal,” French prosecutor Brice Robin told reporters on Thursday.

– According to excerpts published by Bild on Sunday, during the conversation the captain said he didn’t have time to go to the toilet before leaving Barcelona and Lubitz offered to take over at any time.

–  The responses from Lubitz remained normal, but “very short… not a real dialogue,” Robin said.

– According to Bild, the co-pilot is heard saying, among other things, “hopefully” and “let’s see”. After checks for the landing, he is heard telling the pilot he can go now. Two minutes pass and the pilot then says to Lubitz “you can take over”.

– Bild and Robin said the sound of a seat being moved back is heard and a door closing. “We can assume he left to answer nature’s call,” Robin told reporters.

– The French prosecutor believes that, once left alone, Lubitz turned a button on the flight monitoring system that began the plane’s descent.

“This action can only be deliberate,” Robin said. “It would be impossible to turn the button by mistake. If you passed out and leaned over on it, it would only go a quarter-way and do nothing.”

– The Airbus A320 jet descended rapidly for eight minutes, according to the low-cost carrier Germanwings.

– At 10.32, air traffic controllers try to make contact with the plane but receive no reply and an automatic alarm is heard going off at almost the same time, according to Bild.

– The newspaper said that shortly afterwards there was a loud bang, like someone trying to open the door and re-enter the cockpit. The captain can be heard shouting “For God’s sake, open the door”, as passengers’ screams begin to be heard in the background.

– Robin had indicated last week that the black box recorded increasingly frantic attempts by the pilot to break down the heavily reinforced door as per international standards, to which Lubitz made no response.

– At 10.35, Bild said “loud metallic blows” against the cockpit door can be heard, with another alarm sounding about 90 seconds later. At around 5,000 metres altitude, the pilot is heard screaming “open the damn door”.

– At 10.38, Bild’s account indicates the sound of Lubitz’s breathing but him saying nothing. “He does not say a single word. Total silence,” Robin said of the co-pilot during the descent.

– Around 10.40, the plane hits a mountain and passengers’ screams are heard — the last sounds on the recording, according to Bild.

– The plane dropped gradually from around 10-12,000 metres to 2,000 slowly enough, Robin said, that passengers would have been unaware anything was wrong.

“I think the victims were only aware at the very last moment. The screams are heard only in the last instants before the impact,” said Robin.

Struggle to explain what motivated co-pilot in doomed Germanwings flight