Hashtags in graduates’ hearts, smartphones in their hands 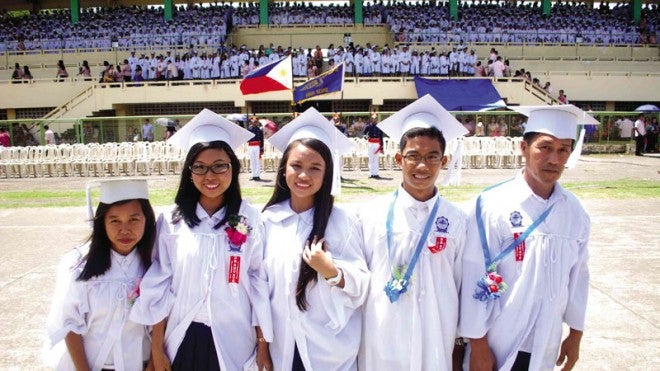 GRADUATION STORIES Among the 1,900 graduates of Quezon National High School in Lucena City are (from left) Rodora Rodriguez, 27, a house help who earned the first honor award in the Open High School Program; Doha Marie Velasco, 16, valedictorian of the Engineering and Science Education Program; Therese Ann Geneblazo, 16, valedictorian of the Basic Education Curriculum; Marlo Frias, 16, who supported his schooling by pushing a railway trolley; and Joel Pielago, 47, a ‘puto-kutsinta’ vendor. The series on their stories starts today. ARNOLD ALMACEN

Some things have changed about graduation, about high school and about the unfolding of the universe for those in their teens. And yet some things never change.

Quezon National High School (QNHS) in Lucena City on Friday graduated the last batch of its students from the old four-year high school system and the last cohort of public high school graduates that can go directly to college after only 10 years of primary and secondary education.

As the candidates prepared to march to the Alcala Sports Complex grandstand, the only venue large enough for the occasion, they fidgeted with their smartphones. That was the most obvious change. The gadget definitely robbed commercial kodakeros of their seasonal largesse, but a few photographers must still have managed to sell their shots to parents clueless about using the phone camera.

Selfies and groupies aside, the processional was as traditional as it could get, with pimply teens appearing miraculously well-groomed in their caps and gowns, lurching about in new shoes and looking self-conscious under the noonday sun.

Change surfaced in the valedictory address too. One of the school’s two valedictorians delivered a speech sprinkled with hashtags. A hashtag is a group of words preceded by the hash or pound (#) symbol designed to serve as an online link or label.

The hashtag is organic to Twitter but it took no time in migrating to Facebook, Instagram and other social networking sites. On Friday at QNHS, it made its way into the speech of Therese Ann E. Geneblazo, the top student in the Basic Education Curriculum (BEC).

Geneblazo said she and her fellow graduates would use the knowledge and values they received from their teachers as they continue to face the complexities of life. “As the saying goes, ‘A good teacher explains, a superior teacher demonstrates and a great teacher inspires.’ #MyTeachersMyInspiration [pronounced ‘Hashtag my teachers, my inspiration’].” She ended her address with “#CongratulationsandGoodLucktoallofus.”

On the other hand, Doha Marie G. Velasco, the valedictorian of the Engineering and Science Education Program (ESEP), closed her speech with an old-fashioned advice to her fellow graduates: “Never give up on yourself and on your dreams.”

The two 16-year-olds bested the other students for the highest honors in their respective programs by balancing their academic standing with leadership and extracurricular involvement, according to teacher Ramonito O. Elumbaring, who served as master of ceremonies together with coteacher Elizabeth R. Zeta.

Despite a rigorous daily schedule of 11 subjects from 6:30 a.m. to 5:00 p.m., Velasco was the overall champion in the Math and Science categories at Palaisipan 2014, a national scholastic competition hosted annually by the University of the Philippines Los Baños. She was the division champion in the same categories at the 7th Online Academic Quiz Bee. She also wrote for The Coconut, the school paper.

“I love Math,” she told the Inquirer.

Geneblazo was the treasurer of the Supreme Student Government and part of the school’s champion cheer dance team. (“#DanceSportTeamisheartheart,” she said in her speech.)

In addition to their awards of excellence as valedictorians from Gov. David C. Suarez, both graduates received the Manuel S. Enverga University certificate of scholarship and the St. Augustine School of Nursing medal of distinction.

Velasco and Geneblazo said they were “super lucky” to have entered high school in 2011.