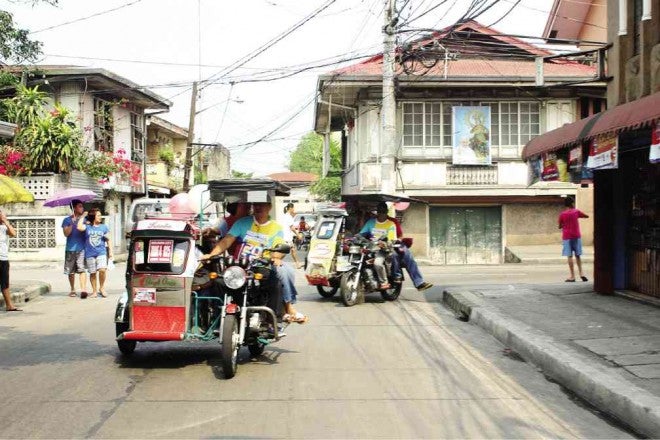 Three-wheelers are the recommended mode of transport in a city where the streets may be narrow but can offer unique dining options and “small-town” cultural experiences. PHOTOS courtesy of Malabon City Tourism Office

While giant malls and fast-food chains dominate the commercial landscape in other cities, Malabon is counting on its “provincial” charm and home-based businesses to draw in tourists.

And its latest items on the menu, so to speak, are dining and heritage tours on tricycles, the go-to mode of transport in a city where the narrow streets can offer wide-ranging delights that are always worth the trip.

Launched by the city’s tourism office on March 14, the tricycle tours take customers to eight heritage sites and at least six of the most popular local restaurants that have held their own against ubiquitous food franchises.

The six make up the initial selections out of the estimated 400 eateries around the city. Despite competition from fast-food chains, these home-based eateries have thrived because their delicious dishes or pastries can be found only in Malabon, said Mayor Antonlin Oreta III.

“Most of them were put up simply because the owners love to experiment on new recipes and preserve the old ones that have been passed on through generations,’’ Oreta said.

The tricycle tours are the brainchild of Oreta’s wife Melissa, a professional chef, who thought of adding a culinary aspect to the heritage tours that were launched by the local government in December last year.

The new concept was most welcome to the Federation of Tricycle Operators and Drivers Association of Malabon Inc. The transport group’s president, Jonie Aguilar, said the project has been a “big help” to the initial batch of 24 drivers who had applied for accreditation.

For now, there are separate packages for dining and heritage tours for two to three passengers (since seating is limited in tricycles). For the heritage sites, the driver charges P400 per tour, the rate already covering all passengers.

The food trip, meanwhile, costs P600 per passenger: P400 covers the food served in the six eateries while P200 goes to the driver.

The trips start at 9 a.m. and have enabled an accredited driver to exceed his usual income, with 10 to 40 tourist hiring him daily since the project began, Aguilar said.

The drivers have been issued IDs and uniforms as they also serve as “tour guides,’’ said Jean Armas, chief of the Malabon City Tourism Office.

The city government doesn’t get any direct income from the project since all payments go to the drivers and establishments, Armas explained. ‘’But this means more business for our small and medium enterprises (SMEs), more reasons to put up SMEs here, and ultimately a more vibrant local economy.’’