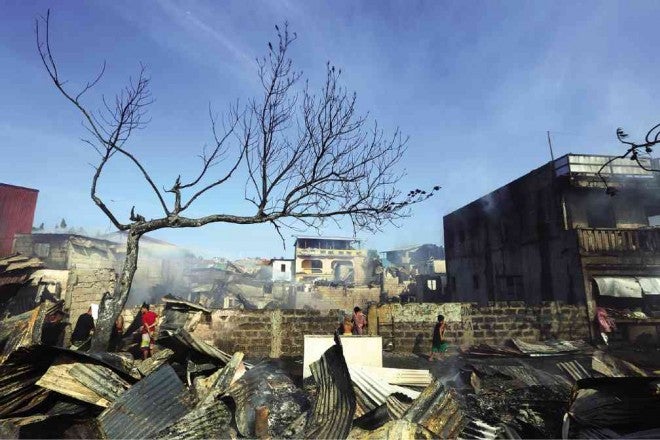 HOMELESS THIS HOLY WEEK A burnt tree is left standing over what used to be a neighborhood of informal settlers in BF Homes, Parañaque City, where a fire destroyed about 100 houses on Saturday. Niño Jesus Orbeta

Insp. Wilson Tana, head of the city’s fire investigation unit, said two residents in an area occupied by informal settlers on Dela Rama Street in Clinic Ville, Purok II, recalled seeing their neighbor Alfonso Reyes cooking on the second floor of his house before the fire started there at 12:55 p.m.

The fire was declared out about three hours later after destroying about 100 homes mostly made of light materials.

The displaced families were given temporary shelter at a nearby school.

Also on Saturday, a fire believed to have been caused by electrical malfunction broke out in Barangay Pinyahan, Quezon City, injuring a 60-year-old man and damaging his furniture shop and a neighboring house.

Edgardo Enriquez sustained minor injuries on his right arm and foot as he tried to put out the fire by himself before alerting the fire station, said city fire marshal Supt. Jesus Fernandez.

Enriquez owned the furniture shop next to an old house at 33 Kalayaan Avenue where the fire started around 10:50 a.m. The residents of the house were complaining of power fluctuations the night before, an investigator said. Kristine Felisse Mangunay and Rima Granali