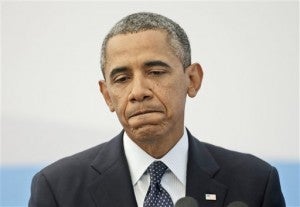 WASHINGTON— President Barack Obama is expressing condolences to Germany and Spain and the victims of a plane crash in the Alps.

Obama said Tuesday that he had spoken to German Chancellor Angela Merkel about the crash. The White House said he had also spoken to Spanish Prime Minister Mariano Rajoy to convey his condolences.

Obama called the tragedy a “terrible airplane crash” and noted that its victims included children and infants. He spoke during an appearance at the White House with Afghan President Ashraf Ghani.

The airplane, a Germanwings jet carrying 150 people from Barcelona to Duesseldorf, crashed in a remote section of the French Alps.

The White House says Obama has offered full US assistance.

Jet crashes in Alps with 150 aboard; no survivors expected