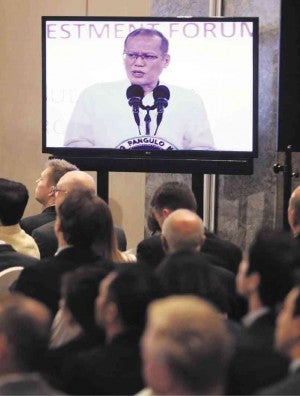 MANILA, Philippines–He used no alliterations like referring to jaded journalists as “nattering nabobs of negativism” as one former American official had said of his critics.

But President Aquino’s message was not off the mark.

Aquino on Tuesday said that under his administration, “there has been so much good news and yet this good news has often been relegated to the back pages of our broadsheets.”

Aquino said the “campaign to change the mindset that negativism sells is still a work in progress.”

Speaking before the Philippines Investment Forum at a Makati hotel, he said that “while it is true that we have had our share of setbacks and challenges, we also have an impressive number of achievements under our belt.”

“This is why, I have made a point to spread the good news, and why I am always thankful for those who stay balanced and constructive, pointing out areas in which we can improve while also acknowledging our progress,” he said.

He reported, among other things, that “2014 was a banner year for FDI (foreign direct investment) reaching an all-time high of $6.2 billion,

“We have likewise posted impressive growth: From 2010 to 2013, the Philippines averaged a GDP (gross domestic product) growth of 6.3 percent. Compare this to the previous three-year period under my predecessor (former President Gloria Macapagal-Arroyo) where growth was just at 4.3 percent.

“On top of this, even in spite of the lingering effects of Typhoon “Haiyan” (local name: Supertyphoon “Yolanda”) and the uncertainty in the Philippine economy, our country still posted a respectable 6.1-percent GDP growth figure last year,” he said.

The Philippines was “likewise upgraded to investment grade by all three major credit ratings agencies in 2013 and has continued to receive upgrades since,” he further said.

“We are indeed making history. All these and many other factors have led to even greater optimism for our country’s prospects. Just to give you one example: Bloomberg recently reported, I’m told, that the Philippines is forecast to be the world’s second-fastest-growing economy in 2015,” he said.

‘You ain’t seen nothing yet’

The President noted that “the tremendous amount of confidence the global community has developed for the Philippines is incredibly gratifying, especially considering that not too long ago, we were known as the ‘sick man of Asia.’”

However, he said his administration “remains hard at work so that we can maximize every opportunity available to us and I think many of you will agree with me when I say, “You ain’t seen nothing yet.”

He cited infrastructure as “one of the sectors that have greatly benefited from our drive to become more competitive.”

“Through the efforts of our Department of Public Works and Highways, corruption has been vastly minimized, if not eradicated and projects are now regularly completed ahead of time and under budget, including those started by past administrations,” he said.

The government, he also said, was “also pursuing another path toward accelerating infrastructure development, namely the public-private partnership program.”

Another sector the administration has focused on is power, which “for the longest time has been rather complicated, to say the least.”

“Right now, the Philippines has a total dependable capacity of 15,665 megawatts (MW), which is or should be sufficient enough to meet our highest projected demand level of 10,222 MW for 2015. But we cannot be content with this, especially with the potential power supply gap in Luzon this summer,” he said.

At the same time, he assured the government “will do everything in its power to build on our economic momentum by continuing to invest in the Filipino people.”

The President said: “There is indeed much reason for optimism. By nearly all available measures, be it GDP, competitiveness rankings or credit ratings, the Philippines is poised for even more successes.”

Aquino asks PH media to not be negative